How to Encourage Kids to Be More Active 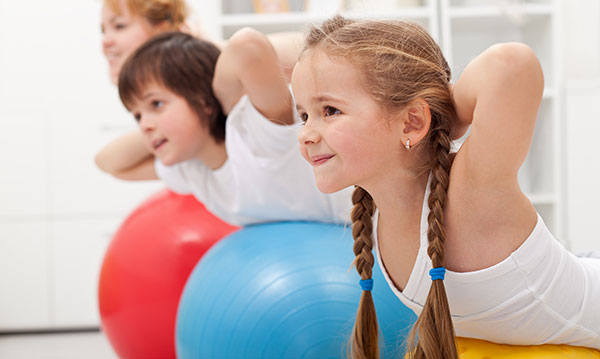 Studies have long shown activity levels in children, especially girls, drop dramatically around the time of puberty. However, a recent Gateshead Millennium Cohort study shows the downtrend in activity levels actually begins as early as the age of seven.

Debbie Adsit, a supervisor for Beaumont Center for Children’s Rehabilitation, says keeping kids active doesn’t have to be complicated but it is necessary.

The Centers for Disease Control recommends 60 minutes or more of physical activity a day for children and encourages they participate in activities that strengthen muscles and bones at least three days per week.

“All kids need time to be active. They have developing bodies and they need to burn off energy,” Adsit says. The activity doesn’t have to come all at one time and can be spaced out to recess, gym class and after school play, she adds.

The activities don’t have to be organized or competitive, Adsit says. They can be as simple as turning on music and having a dance party in the house. She says it isn’t just kids that can benefit from the movement, adults need to stay active as well.

“We have children in our program and usually their parents are good exercisers, but not good role models for physical activity,” says Lillystone.

Parents will often stop at the gym on their way home from work or during their lunch hour, Lillystone adds. Their kids don’t see them working out or learn how to incorporate those activities into their own lives.

“Just get out and play,” Lillystone suggests. “I like to promote the idea, especially for children, to think of the activities as play as opposed to exercise. Parents should create an atmosphere that supports an active lifestyle. It doesn’t mean parents have to take them somewhere for organized activities.”

Lillystone says children need to incorporate exercise into their everyday life, such as playing in the backyard, an active scavenger hunt or playing on a trampoline.

Adsit says sometimes it’s about getting back to basics. Kids like activities like jump rope, hula hooping, Frisbee, kickball, hopscotch and throwing balls. For developing fine motor skills, she says Play-Doh and scooping and pouring of water or rice are great exercises.

“They are all simple activities but they stimulate the muscles and bones,” says Adsit.

Bike riding is another activity that Adsit says is great for the entire family.

“That works the whole body. Once children are able to ride their bikes without a parent’s assistance, it’s something the whole family can do together – and that’s something the children will take into adulthood,” says Adsit. She says the bikes don’t have to be fancy and there are plenty of trails in the metro Detroit area designed for riding bikes.

While many people see Michigan weather as an exercise deterrent, Lillystone says it shouldn’t be.

“Quite often we use snow as an excuse not to go outdoors, but we actually need to use that as an excuse to go outdoors,” says Lillystone, who adds that cross country skiing and snowshoeing are great winter activities. “If it’s rainy, go out and jump in the puddles. Children are waterproof.”

It’s important to limit screen time and electronic devices, which cause kids to sit for long periods of time.

“We start to see obesity and weight gain when people are exposed to more than two hours of screen time per day,” says Lillystone. “Without electronics, children will find things to do. Typically those things are more active and don’t involve a structured activity. It’s their nature.”

It’s important to instill good habits early on so the children will continue the model later in life, Adsit adds.

“Kids can’t just sit all day. It’s not good for their mental development or their physical development. Sometimes they need to be reminded to get up and move. As parents and teachers, we need to help them make good, healthy patterns in their lives. We are setting the building blocks for their future,” says Adsit.