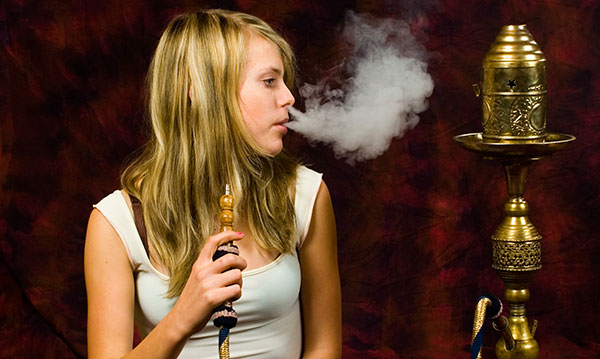 Imagine if your teen smoked 100 to 200 cigarettes in an hour. If you think that’s an impossible feat, you’re wrong. If your teenager is smoking hookah, just 60 minutes of puffing away is actually equivalent to inhaling that many cigarettes, according to the American Lung Association.

Hookah, also known as nargile or shisha, is the Middle Eastern water pipe that uses charcoal to heat tobacco and produce smoke. Smoke then passes through a water jar and into a hose for you to inhale.

As cigarette smoking continues to decline, hookah’s popularity has skyrocketed. In Michigan, roughly 200 businesses have “tobacco specialty retail store” exemptions to the smoking ban law, the Michigan Department of Community Health told Metro Parent back in 2013; those include hookah bars.

It’s cause for concern, says Dr. Samuel Fawaz of Beverly Hills Internal Medicine, who’s also co-founder of a local effort called Hookah Awareness Coalition. “According to the World Health Organization,” he says, “it is quickly becoming the largest epidemic or public health epidemic in the world because of how many people are doing it.”

Teens and college students are lounging at their local hookah spot, which is a prime place for them to socialize and engage in a smoking session. And, in some cases, younger kids are paying visits, too.

In fact, on Aug. 5, 2013, the city of Auburn Hills halted the opening of new hookah lounges for 180 days – after police received complaints that minors were in these establishments. There are currently two in the city, says Lt. Ryan Gagnon with the Auburn Hills Police Department. Ultimately, the city may enact new ordinances.

Troy did revise its code on smoking lounges in May of that same year. It now requires a midnight closing time and an age minimum of 18.

“It’s just like any other vice. It’s a highly profitable market,” Fawaz says. And while it may be profitable to local lounge owners, it’s detrimental to your teen’s health.

Because hookah smoking flew under the radar for a while, many parents were not aware of its consequences.

The Centers for Disease Control and Prevention notes the “mode of smoking” causes hookah smokers to absorb higher concentrations of toxins found in cigarettes because they puff more, inhale deeper and smoke for longer periods of time.

And, by smoking hookah, you can acquire the same diseases as smoking cigarettes – including lung, oral and esophageal cancers, heart disease, stroke and emphysema.

Plus, “It’s a social activity. It’s a cultural activity, and they pass it from one person to the other,” Fawaz says – and bacteria and viruses can be passed around with the hose used for inhaling. Some common diseases include herpes, hepatitis and tuberculosis.

“For me, smoking, especially hookah smoking, although it’s a vice, it’s one of the very few habits that one can have that can actually hurt other people not doing the same activity,” he says.

With hookah, much like cigarettes, people who are not participating in the activity will inhale secondhand smoke, which harms their health. To top it all off, kids are mixing other illicit substances, like marijuana, in with the tobacco and smoking it.

“Like any other activity, kids are very creative,” Fawaz says.

Fawaz stresses the importance of enforcing laws to make sure that minors are not being sold tobacco. But that’s just a piece of the puzzle. Raising awareness is key.

“Education on many levels. Education about the hazards and the reality of hookah smoking,” he says. Informing parents and presenting facts to kids in school is part of that goal. With his Hookah Awareness Coalition, Fawaz and other Beaumont Health System reps are working to bring attention to the issue, too.

“You can’t shut (hookah lounges) down. It’s a legal product,” he says. It’s all about providing information to allow adults and teens to make informed decisions.