How to Stop Summer Acne

Zits are no picnic, especially when the weather is awesome. Here's how to deal. 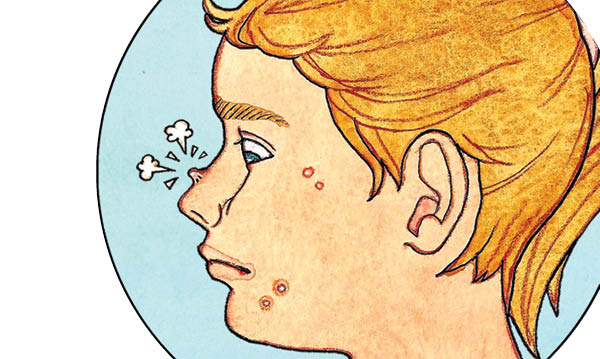 Blackheads and breakouts come with the turf in adolescence. But summer can make a difference. With some kids, zits seem to take a vacation, too. But with other pimple-prone teens, all that sun and sweat puts pores in overdrive. What’s up, and what’s a kid to do?

First, let’s look at the enemy. “Acne is inflammation of the sebaceous glands in the teen years – mostly on the face, but can also occur on the chest and back,” says Christopher Remishofsky of Georgetown Dermatologists, P.C. in Sterling Heights. “The skin cells during puberty get sticky, build up, and you get a whitehead or blackhead.” Hormones, stress and family history can boost odds. Pair that with clogged pores and a bit of bacteria naturally found on the skin and boom: zits.

For kids with inflammatory acne – the kind that gets red, painful or swells – summer can be a break. In fact, Remishofsky says he often sees cases drop during these months. Unfortunately, adds Joseph Stutz with Dermatology Center of Rochester Hills, the sun only helps the issue; it doesn’t cure the problem. “Sunlight is an anti-inflammatory,” he explains, meaning it can temporarily provide some relief. Tans and other sun exposure can darken the skin and temporarily hide this type of breakout, too.

For kids with mild white and blackheads, though, not so much. “If you use sunscreen, that can plug the pores and make acne worse,” Stutz explains. “Some people sweat a lot, and that can make it worse” too. Try sunscreen that’s noncomedogenic, or oil free; “Coppertone makes a really good one.” He also suggests that those prone to sweating wash their faces often. “If you have sensitive skin, use a gentle cleanser like Cetaphil. If you have more oily skin, (try) something with salicylic acid. It exfoliates the skin around the pores.” Remishofsky adds benzoyl peroxide, which unclogs pores and kills bacteria, and glycolic acid to the list. “I would say stick to an acne-specific product,” he says. “If you don’t see an improvement (after a few weeks), seek medical attention.”

Cosmetics can also compound matters. “Makeup covers the acne, but it can make the acne worse,” Remishofsky explains. If your teen decides to “cover” breakouts, again, look for noncomedogenic cosmetics that won’t clog pores.

There isn’t a lot of data connecting specific foods or clothing to acne, Remishofsky adds. Stutz notes links have been found with sugary foods but not greasy – and that tight-fitting clothes can be a trigger. But, as he puts it, “It’s all very personal.” Remishofsky also prefers a personal approach. If a patient finds a specific food, like dairy, causes a breakout, he advises avoiding that item. Certain activities can cause breakouts, too. “I do see acne flares when kids start sports or are wearing sporting equipment,” he says.