How to Talk to Kids About the Dangers of Alcohol

Kids are drinking more at a younger age, a study finds. An expert talks negative effects of alcohol and tips on talking to kids and teens about the dangers. 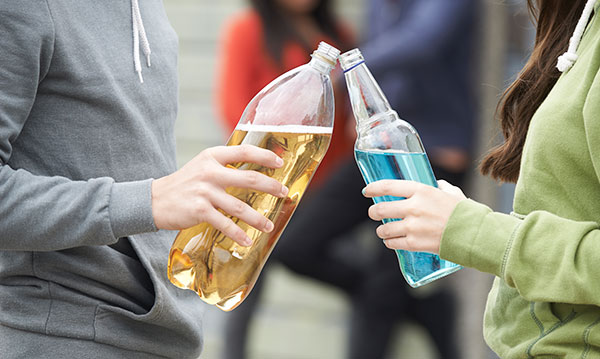 Remember when you were in high school and hitting the all-night keg party was oh-so-cool? Now that you’re grown and have kids of your own, that party doesn’t sound so fun – and you’d do just about anything to keep your kiddos from the dangers of alcohol consumption. Unfortunately, it seems that kids still think the same way and, according to an August 2015 study by the American Academy of Pediatrics they are thinking positively about drinking as early as age 9. So what’s a parent to do?

Dr. Terrill Bravender Jr., professor of pediatrics and division director of Adolescent Medicine at the University of Michigan C.S. Mott Children’s Hospital, offers binge drinking facts, info on the effects of long-term drinking and some tips on how to have a conversation with kids and teens.

Just last year, a study about binge drinking was published in the September 2015 issue of Pediatrics – and the findings were a bit scary. The American Academy of Pediatrics found that two out of every three students have had “more than just a few sips of alcohol by the end of high school,” and around 28-60 percent of high school students reported binge drinking or, generally speaking, consuming three to five drinks within a two- or three-hour period.

These numbers are quite concerning considering all the consequences alcohol consumption can have on a developing adolescent brain.

“There is a lot of evidence that show kids who start drinking early have long-term impaired cognitive function,” Bravender explains. “If you drink alcohol in your teenage years, especially your younger teenage years, your brain isn’t able to fully mature in a way as you would expect it to. Those who drink as teenagers have, on average, lower grade point averages, lower school performance and later problems with employability.”

The father of two adds that younger kids who drink are more likely to develop an alcohol dependence later in life and, the study reports, that binge drinking is associated with higher rates of teen pregnancies.

In addition, more than half of fatal car accidents involving teens or young adults are associated with alcohol, Bravender says.

A change of thought

Between ages nine and 13 kids begin to start looking at alcohol in a different way and they become interested in it, Bravender explains.

“Kids younger than nine either don’t notice the alcohol advertising as much or they’ve smelled mom or dad’s beer or wine, think it’s awful and have a low opinion of it,” he says.

By the time a child reaches their teenage years, alcohol consumption begins and increases each year throughout high school.

“Alcohol consumption is extraordinarily common, particularly in later high school-aged kids,” the doctor explains. “Probably about 80 percent of high school seniors have had alcohol to drink before and half, or even greater than half, of those kids who drink, binge drink.”

The doctor recommends starting the conversation about underage drinking with your kids at around age nine, and use everyday instances or examples to bring up the conversation.

He also says it’s best to include your opinion about alcohol consumption and let them know that it is a safe thing to discuss with you.

Talks with your teens

If you’re raising a teen, and the window of opportunity to speak to your nine-year-old has passed, it’s not too late to talk to your teens about underage drinking. Around 80 percent of adolescents confess that their parents are the biggest influence on whether or not the drink, according to the study.

Because of this, it is important for parents to talk to their teens about drinking at parties and to create a safety plan if they find themselves at a party without a safe way home, Bravender explains.

“I’ve had some parents actually give their 16-year-old a card or a ticket and say this is a ‘no questions asked’ ride home,” he explains. “So, you can call me any time of the day or night and if I start asking what is going on you can hand this to me and I will shut up.”

He also says it’s important for parents to avoid giving teens alcohol, even if you think it’s better for them to drink at home than out in public driving drunk.

“I think that parents have to balance it between not endorsing an illegal activity with the reality that the majority of kids in high school, especially seniors, will drink alcohol,” he says.