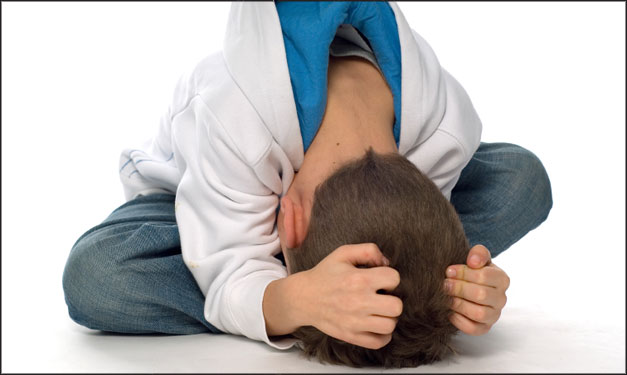 Imagine a normal body function suddenly careening out of control, causing pain, embarrassment, and seriously interfering with normal growth and development. That briefly describes a condition known as inflammatory bowel disease, or IBD.

And, of the 1.4 million patients in the United States, about 150,000 are children under age 17. Diagnosis often happens between ages 15 and 35. Still, that means many families must learn to survive – and, ultimately, thrive – with IBD.

The exact cause of Crohn’s is unknown, but researchers believe genes, environment and the immune system are all factors. Stress and unhealthy diet may worsen – but not necessarily "directly cause" – symptoms, says Dr. Chris Dickinson, chief of pediatric gastroenterology, at C.S. Mott Children’s Hospital in Ann Arbor. His division evaluates more than 1,200 new patients a year, he notes – a number that’s been steadily increasing.

These depend on what part of the digestive system is affected, ranging from mild to severe and varying from person to person.

However, major symptoms of Crohn’s include crampy stomach pain, fever, fatigue and persistent, watery diarrhea, according to the National Institutes of Health. Others range from fullness, gas and constipation to loss of appetite, liver inflammation and skin rash.

Symptoms may prevent children from participating in activities they enjoy. The emotional and psychological issues of living with chronic disease can be especially difficult. Youngsters are sometimes hospitalized for extended stays, may require surgery, have frequent flare-ups of their symptoms and may have to miss school or other events.

IBD also can lead to complications, including an obstruction of the intestine due to swelling and the formation of scar tissue. A Chrohn’s diagnosis can mean a higher risk of small bowel and colon cancer. And both diseases can stunt growth, delay puberty and weaken the bones.

The condition is marked by periods of improvement followed by flare-ups of symptoms.

Even so, there’s a great deal of hope for those diagnosed with Crohn’s. Parents should expect their child can achieve goals and lead productive lives. Thriving includes physical, emotional, social, athletic and intellectual areas, Dr. Dickinson says. "The same bucket of resources you give your kid shouldn’t change."

Treatment decisions are made on an individual basis and modified based on the severity of the symptoms and by the area of the digestive tract involved. Dr. Dickinson says since Crohn’s symptoms vary, doses of medications are tailored to each patient in order to minimize potential side effects.

Maintaining a good support system is crucial to helping your child, adds Shari Barnett, whose son, Zac, 15, was diagnosed three years ago with Crohn’s.

"It was overwhelming at first," says Barnett. "Now, it’s a matter of keeping an eye on him to make sure he takes his meds." Drugs don’t cure IBDs, but they are effective in reducing the symptoms. Patients must stay on long-term medications to try to keep symptoms from returning.

Dr. Dickinson says allowing a kid with Crohn’s the opportunity to be independent is very important. "My biggest struggle with talking to parents is convincing them that their kid’s life should be their own life, and not about Crohn’s disease," he says. "Parents love their kids and they may worry, ‘Did I stress them too much? Did I over schedule them with gym or soccer?’ But, kids should be allowed to move along. Parents shouldn’t limit them."

On the other hand, kids with Crohn’s may try to avoid school. Dr. Dickinson says parents shouldn’t allow IBD to be an excuse. "If you would have kicked your kid to go to school before, then, make them go now," he says.

New research is seeking ways to control the condition. There’s emerging evidence that vitamin D, produced in the skin upon exposure to sunlight, may possess properties regulating the immune system in IBD. In addition, vitamin D deficiency appears common in IBD.

Although there is no cure for Crohn’s disease, it’s the focus of various studies – including two in development by the University of Michigan. And local families remain optimistic that the findings will further help their children live happy and productive lives.