Little Girl Gets Spirit of Detroit Award for Helping Kids 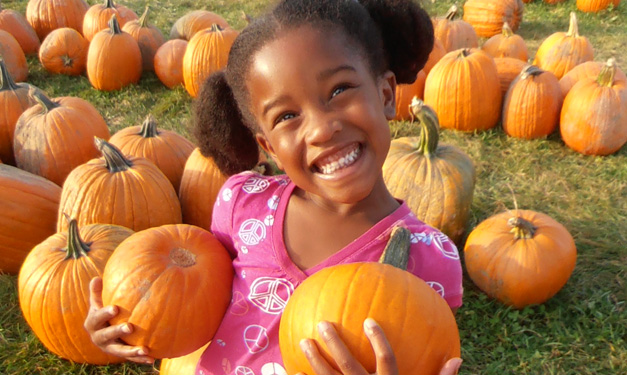 Dozens of brightly painted pumpkins speckled Children’s Hospital of Michigan in Detroit in October of 2011. And the girl behind them – Rielly Rudolph – recently earned an esteemed Spirit of Detroit Award for outstanding service as a result.

It all started when she realized sick kids may not get to trick-or-treat. “She literally stopped on her own mental dime,” says her dad, David Rudolph. The kindergartener, who adores Halloween, decided to take action.

“They should get a pumpkin,” she told dad. When he asked what she was going to do, Rielly declared, “I’ll paint ’em!” And, after ironing out details with Children’s, she sure did. Soon, Rielly, dad and mom Contessa were covering pie-size pumpkins with acrylics, yarn, foam – you name it.

“It was a cool thing for us as a family, to really explore our creative side,” says David, a PR consultant. “We were just churning out pumpkins!”

But spunky Rielly really took the reigns, recruiting kids at her school, St. Sebastian in Dearborn Heights, too. All told, they donated 175 pumpkins, which the hospital placed in communal spots, along with its outdoor healing garden.

The award came as a total surprise, says David, who was told Rielly’s the youngest-ever recipient. When dad told her she’d be receiving a very important piece of paper, Rielly’s reply? “Can I just have a Popsicle?”

“Classic little 5-year-old,” laughs David, who shared the story at the Detroit City Council meeting where she was honored. (Rielly got a tad shy.)

Plans for the “No Carve Pumpkin Creations” are already in swing for this fall. They’re working on a picture book about the experience, too: “Simple words about expressing creativity and compassion,” David explains.