How to Maintain Healthy Sleep Habits During the Holidays

A metro Detroit expert shares tips for healthy sleep habits during the holidays and preventing extra holiday stress on account of overtired kids. 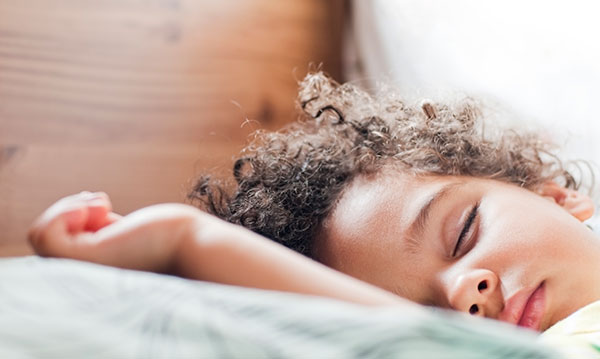 The holiday season is upon us, bringing with it calendars chock-full of family gatherings, parties and shopping excursions. It’s a rush to fit everything in, but something important can get lost in the process: maintaining kids’ healthy sleep habits during the holidays.

When a busy holiday schedule means late nights and missed bedtimes, the change in schedule can wreak havoc on a child’s mood.

“It’s pretty common,” says Dr. Angela Tzelepis, senior director of The Children’s Center’s Behavioral Sleep Clinic in Detroit. “Anything that affects the routine, in particular at Christmastime, can impact sleep – can impact kids and families.”

Impact of a packed holiday calendar

An overbooked holiday schedule is becoming more common as families increasingly have high expectations for the season and what it must include, Tzelepis says. And for kids, all the anticipation can make it harder to sleep even when they’re in bed on time.

“They’re out of school and don’t have the typical routine that they have, so oftentimes sleep will get compromised. I also think there’s a lot of excitement around the holidays so that can disrupt sleep,” she says.

A little missed sleep on an ongoing basis can lead to big problems, though.

“What you’ll see is an increase in irritability, meltdowns, temper tantrums,” Tzelepis explains. “Tired and sleepy kids don’t say that they’re tired. What you’ll usually see is more irritability, difficulty with transitions or doing what you’re asking them to do.”

Beyond that, sleep has been proven to affect kids’ cognitive abilities like concentration, focus and memory. Mental health is also affected.

“And from the physical health side, sleep is important because there are a lot of things that happen during sleep,” including the release of certain hormones and neurotransmitters that affect brain development, Tzelepis says. “Having adequate sleep is important for a child’s development.”

Long-term health consequences can even include higher risk for obesity, heart problems and diabetes.

“There’s more and more that we’re learning about the importance of sleep and how it really does interplay with so much of our health,” she says. “We talk a lot about having good diets. … There’s not that emphasis on healthy sleeping and adequate sleeping, but it’s equally as important.”

Sleep solutions for the holidays

So what can parents do to keep up healthy sleep habits during the holidays – and help kids get back on track after the break? Here’s a look at several key recommendations.

If your kids aren’t getting enough sleep during the holidays, don’t expect top-notch behavior. “You can expect that they may be irritable,” Tzelepis says.

“Sometimes families can’t avoid these things. You don’t want to say you can’t visit grandma because Johnny has to get all of his sleep, but (it’s about) recognizing what’s going to happen. Trying to find that balance and not overscheduling yourself.”

2. Stick as close to your routines as possible

Ideally, families would keep their usual sleep schedules for naps and bedtimes with their kids during the holiday season. But since that isn’t always realistic, aim to stay as close to it as possible.

“Try to maintain the bedtime and wake time as close to what the normal time is,” she says. “If your child is young enough that they’re getting naps, you try to get the nap in there somewhere,” even if it’s in the car or at a relative’s house.

It’s not uncommon for parents to let kids stay up as late as they want on weekends and school breaks. It’s not advisable, though. Set a cut-off time, Tzelepis says.

If your child stayed up until midnight, letting him sleep in until lunch time will only extend how long it takes for him to get back on schedule.

“I see this a lot, especially with adolescents; they’ll sleep in until 12 or 1 in the afternoon, so now what’s happening is their biological clock has shifted,” she says, and it’ll be impossible for the child to fall asleep at a “normal” time the next day.

It’s too much of a shift to make up in just a few nights before school starts back up – an issue many parents experience after a long summer break.

“It’s not worth it,” Tzelepis says.

5. No screens in bed

Though this advice applies to all children at any time of year, the holidays can be time when parents let this slide – especially if kids have new games or phones they want to play with.

“Absolutely they should not have electronics” before bed or in the bedroom, Tzelepis says. “There might even be more of a temptation around the holidays. Once you start setting that precedent, it’s really hard to remove them from it.”

6. Be mindful as kids get back in the routine

If your kids haven’t stayed on schedule over the break and it’s time to get back in the regular routine, be patient and recognize that it may take some sleepy mornings and irritable days before things are back to normal.

“Anticipate there’s going to be challenges,” Tzelepis advises. “You don’t want to punish the kid for something that is happening because their biologic system has been disrupted.”

7. Have a good bedtime routine

Whether you’re working to keep your child’s sleep habits intact during the holidays or making up for a mixed-up routine, having a positive and consistent bedtime routine is always helpful.

An hour before your child’s bedtime, stop using any electronics and focus on quiet activities. Avoid arguing with your child or introducing any tension during this time, and make sure your child’s room is dark enough and not too warm.

“A little snack before bedtime is often helpful,” Tzelepis adds.