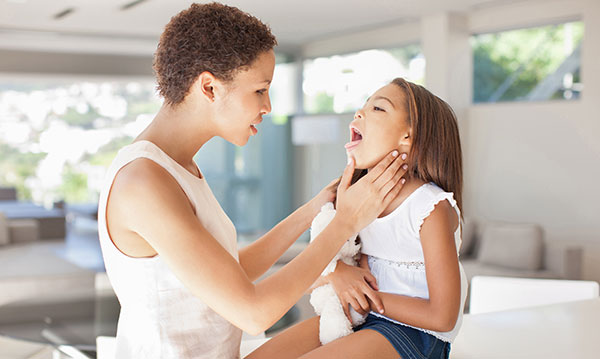 My 13-year-old daughter has this chronic sore throat and seems really run-down and tired. She’s been this way for several weeks, and at first I thought it was allergies, but that doesn’t seem to be the issue. I’m wondering if it could be mono or "the kissing disease." But does that even still exist and, if so, how do you get it?

Infectious Mononucleosis does still exist and is rather common. It is typically called Mono and is most common in adolescents and college age students. The germ that causes Mono is Epstein Barr Virus (EBV) and it is transmitted through close contact, especially through saliva, so it is often called the kissing disease. It can also be transmitted by other close contact so if your child develops Monoit doesn’t mean that they have been kissing anyone. Sharing drinks and food can transmit the germ, as can other close contact. The main symptoms of Mono are a severe sore throat, fever, swollen glands and fatigue. With a bad case of Mono, the infected person may want to sleep all day for many weeks. It is diagnosed by blood tests, which a doctor would order if the symptoms suggest the diagnosis. The physical exam would typically show very large swollen glands, a bright
red throat with a white coating on the tonsils and often an enlarged spleen. The enlargement of the spleen can be dangerous since it is full of blood and if damaged can cause severe bleeding. Because of this, all contact sports should be stopped until the spleen size returns to normal. This can take up to 90 days.

Mono is a strange illness. After exposure it typically takes about six weeks until the exposed person gets sick. This is much longer than most illnesses and makes it almost impossible to figure out where the disease came from. It is also not very contagious to family members and others in the household rarely get sick. A few weeks ago, I was watching an episode of the TV show Glee with my children and the plot twist was that the evil girl wanted to get everyone sick so she exposed herself to Mono and then kissed one of the boys, who kissed one of the girls. The next day both the boy and girl were sick with Mono-like symptoms while the evil one gloated that she had gotten them sick. In reality, the first boy would not have gotten sick for six weeks, and only when he was sick could he have transmitted the illness to the next girl and it would then have taken her six weeks to get sick. My kids thought I was crazy yelling at the TV that they couldn’t be sick in one day with Mono but I guess that is the trouble in watching silly TV shows with a doctor.

Treatment for Mono is mainly supportive: trying to help make the sick person comfortable since there is no medicine to kill off the mono germ. Doctors will sometimes prescribe a short course of steroids to shrink the swelling of the tonsils and help the person fell better. Remember that even though it is called the kissing disease it does not have to come from kissing. Your sick child just needs your support so leave out the accusations about kissing.