More Parents are Opting Out of Vaccines for Kids

A growing number of children aren't getting school-mandated vaccinations, a new study finds - for non-medical reasons. What does this mean for Michigan? 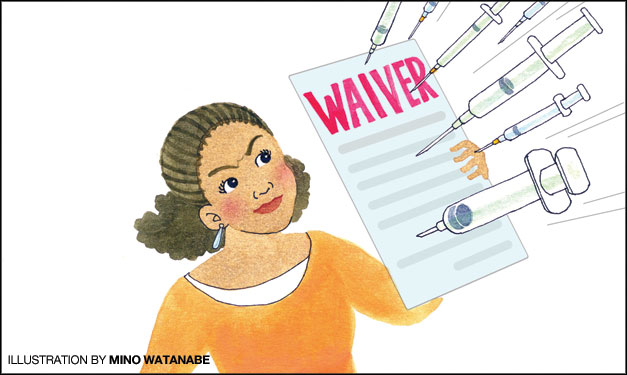 If you were a mom or dad in the 1950s, news of the polio vaccine was a huge relief. There were nearly 60,000 reports of the crippling disease and 3,000 deaths just a year before it was unveiled.

But some parents today aren’t as grateful for vaccines for chicken pox, whooping cough and many other illnesses. A new study in the New England Journal of Medicine reports an increase in parents opting-out of vaccinating kids for non-medical reasons.

And Michigan – which recommends dozens of shots over several visits to prevent 16 total diseases from birth to age 18 and requires vaccines for childcare programs and at school entry – is no different. Medical and religious exemptions have always been options, but the Michigan Department of Community Health notes a spike in non-medical or philosophical reasons.

Waivers tend to increase when the state introduces new requirements, says Bob Swanson, director of the MCDH immunization division, which monitors vaccines for preschoolers, sixth graders and new entrants to a school district. This happened two years ago when new adolescent vaccines came out.

“When we look at waivers overall, we find that in childcare, it’s about 78-percent of all of our waivers were an ‘other’ or philosophical reason,” says Pat Vranesich, section manager of the MCDH immunization division.

With a higher number of kids who are not vaccinated, Vranesich says school populations are at risk. “That school building or that classroom, depending on the disease, could be vulnerable to getting that outbreak,” she says.

To prevent that, kids get about 30 vaccines in the first six years of life – prompting many parents to opt-out for non-medical reasons.

However, Swanson believes vaccines are imperative to a child’s health, as well as the health of the community. “Vaccines have to be a community endeavor,” Swanson says. “We have to rely on the community to protect those that don’t respond to the vaccine and can’t be vaccinated.”

Still, the decision to vaccinate is not for every family. And parents looking to obtain a philosophical exemption can get a form through their child’s school.

“They need to identify which ones they are objecting to,” he says. “More (parents) object to just one or two vaccines than to all the vaccines.” Parents should be aware that there are cases where non-vaccinated kids cannot attend school with the rest of their classmates.

“The signing of a waiver does not guarantee them to stay in the program when there is an outbreak in a school,” Swanson says.

The decision to sign this waiver is ultimately up to the parent.

There’s been long-standing debate on the pros and cons of vaccinating kids.

Troy-based Michigan Opposing Mandatory Vaccines has been a local voice since 1993.

“The focus needs to be on allowing the body to establish strong, natural immunity,” says Mary Tocco, M.O.M.’s director of vaccine research and education. M.O.M.’s mission is to provide info on vaccinations and support parents’ vaccine-decision rights in Michigan.

“I have been working at educating parents of the dangers for over 25 years,” Tocco says, “and I believe parents no longer ‘trust’ what the American Academy of Pediatrics or any other agency is saying about the vaccines.”

MDCH’s Vranesich notes that research has shown some parents are “vaccine hesitant” – more worried about the shot than the disease.

Research and consult a professional, she adds. “What a parent should do is talk to their doctor if they have concerns about vaccines – any of the vaccines required by schools.”

Many factors can play into opting in – or out. Sometimes, a physician may tell parents to stop vaccinating their children or choose a different vaccination schedule.

Hazel Park mom Jamie Fletcher-Parker halted the traditional vaccination schedule upon her pediatrician’s suggestion. When her daughter was just 6 weeks old, she was diagnosed with a “failure to thrive.”

In her case, she says, it was the right choice. “Here we are with a healthy, smart little girl, who is able to play and be around children and not get sick,” she says of her daughter, who’s now 21 months.

Taylor mom Wendy Uchtorff Persinger chose an alternative schedule for vaccinating her kids, who are 12, 7 and 5.

“Our pediatrician suggested this after my daughter was diagnosed with muscular dystrophy at age 1,” Uchtorff Persinger says. “We do no more than two shots per visit, and only one live vaccine at a time starting after age 18 months.”

However, she didn’t feel comfortable totally opting out.

“I do not want children to suffer and die needlessly from diseases when there are vaccines out there to prevent them, ” she says.

Both moms did their homework and figured out what was best for their kids – with the help of their doctors.

That’s something both camps can agree on.

“Take the time to research all the vaccines separately and make informed decisions,” Tocco says. “Parents spend hours picking out car seats and baby furniture, and they really need to make this a top priority.”