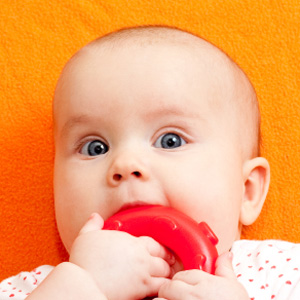 There's nothing as precious as a baby's smile. That heart-melting grin means that your little one's eyes are working properly – because a baby's smile is a response to seeing other smiles.

Unfortunately, babies who don't smile might suffer from Leber congenital amaurosis, a rare disease characterized by infant blindness. But scientists are working to help them.

Researchers from the Massachusetts Eye and Ear Infirmary, The Children's Hospital of Philadelphia, Loyola University Chicago Health Sciences division and their colleagues have identified a new gene linked to the LCA.

What the research means

Leber cengenital amaurosis is an inherited retinal degenerative disease that causes severe loss of vision at birth. It can also result in roving eye movements, deep-set eyes and photosensitivity.

This newly pinpointed gene, called NMNAT1, is one of now 18 known genes that cause two-thirds of all LCA cases.

The discovery will help the development of sight-saving gene therapy, according to the researchers. The immediate benefit is that affected patients will know the cause of their condition.

Unfortunately, the deeper impact of this finding is going to be limited, says John D. Roarty, MD, chief of ophthalmology at DMC Children's Hospital of Michigan.

"We are still in the process of working out what these genes do and what effect they have on the retina," he says. "Once you figure out how the gene works, then it gives the opportunity to fix the problem."

In normal eyesight development, newborns to about 6 weeks start to respond visually, according to Roarty. By 8 or 10 weeks, babies will begin to track and follow objects.

Children with LCA, however, can't see well with their retinas – and therefore don't develop normal followings. By two or three months, if a baby doesn't have normal visual responses, such as following things around or smiling when you smile, there might be something wrong. An electroretinography test (ERG) will indicate very little visual function, and is important in diagnosing LCA.

In addition, if a child doesn't develop normal fixation/sight early in life, her eyes will have a tendency to develop nystagmus (jiggling of the eye on its own). Infants with poor eyesight also tend to develop oculo-digital reflex – where they press on their eyeballs for visual stimulation, which can cause damage to the eyes.

Roarty recommends that parents take their children to a pediatrician or family doctor for a basic vision screening around 6 months of age, and then again at about 3 years old.

"If I had a child that is acting normally from a visual standpoint, a basic screening from the pediatrician or family medicine doctor is all that's needed," he says.

The state of Michigan has a vision-screening program that starts in preschool. The screenings are conducted by local health department staff, who are re-trained every year, according to Roarty. Vision screenings occur in preschool, kindergarten and first, third and fifth grades.

Roarty says if children are passing the vision screening tests, there's no requirement that they have to get an exam by an eye doctor. If there's a worry or family history, Roarty recommends a good eye exam by kindergarten.

"You always want to pick things up early if there's a concern," Roarty says.