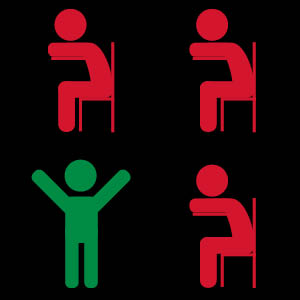 Whether it's yoga or dance or soccer, kids should be spending one hour each day doing some kind of exercise. But, according to some recent findings, it appears kids aren't as active as they should be. Partial study results from the 2012 National Youth Fitness Survey, which involved kids ages 3-15 and were released in early January 2014, found that only 1 out of 4 children meet the recommended one hour of daily vigorous activity.

The study used funds from the Affordable Care Act and consisted of two parts: an in-home survey followed by a standardized physical examination. Kids reported their daily activities outside of school and gym class. Children and parents were paid for participating in the survey.

"It is important for parents to take charge and set good examples for their family in pursuit of a healthy lifestyle," says Karen Pfeffer, a registered nurse and coordinator of community health and education at Crittenton Hospital Medical Center in Rochester.

While technology and excessive "screen time" may be to blame for a lack of exercise among some tweens, technology can also be used for promoting activity, Pfeffer says. Think workout videos or DVDs to engage kids in activity. Pfeffer says, "Have fun as a family!"

Overuse of technology isn't the only culprit for poor physical activity levels. The American Academy of Pediatrics (AAP) addresses a commonly voiced concern: "My neighborhood isn't safe." Like Pfeffer, the AAP recommends in-home workout videos or DVDs and dancing indoors to favorite music. Other AAP suggestions include using the YMCA, Boys and Girls Clubs, or finding a nearby community recreation center.

Is physical education the answer?

Is requiring more physical education classes in schools the best answer to combat this dismal news? Not so fast, says Aaron Chalker, a physical education teacher in Birmingham, and immediate past president of the Michigan Association for Health, Physical Education Recreation and Dance.

School activities, such as before or after-school programs, are a good way to help tweens meet the recommended activity goal of one daily hour of vigorous activity, Chalker says. He also points out that studies have shown that engaging in brisk activity prior to tackling a difficult subject helps students perform better.