Parents Are Falling Behind on Teenage Vaccinations

A new poll from the University of Michigan explores this common problem. Find out what parents should know about teenage vaccinations. 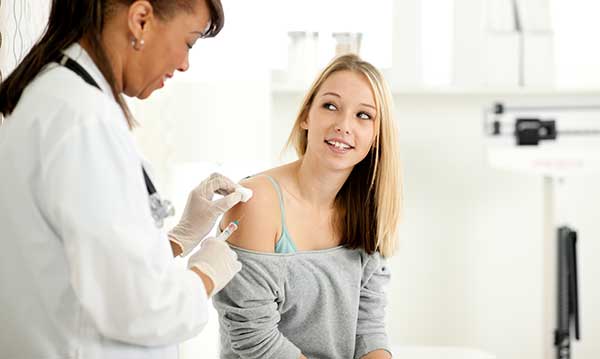 Parenting an infant or toddler means vaccines are usually a routine part of your child’s annual well visits. But what about teenage vaccinations?

As your kids get older, especially into the teen years, you might assume they’re off the hook for this uncomfortable but necessary part of preventative care. But you’d be dangerously wrong – and, unfortunately, in good company.

A new poll from the University of Michigan C.S. Mott Children’s Hospital found that 90 percent of parents surveyed believed their teen had received all the vaccines that are recommended for their age, but researchers know that’s not the case.

The Centers for Disease Control and Prevention estimates that only a third of teens have received their second dose of the meningitis vaccine by age 17, and less than half of boys age 13-17 have completed the HPV vaccine series.

Flu vaccine coverage among teens is also low, with less than half of adolescents receiving the annual shot.

The poll confirmed what many in the field believed might be causing the low rates: parents just aren’t aware of the schedule for teenage vaccinations.

“Parents think their kids are done,” says Sarah Clark, a U-M researcher and co-director of Mott’s National Poll on Children’s Health. Part of the problem, she says, is that health care “just works so differently for adolescents than it does when your kids are young.”

More regular well visits – and even reminders from your pediatrician’s office about scheduling them – make it easier to stay on the recommended vaccine schedule.

“It’s all kind of wrapped up into a package that is largely facilitated by the provider,” Clark says. “It isn’t necessarily the norm that every adolescent gets a well child visit around the time of their birthday.”

Plus, new and changing recommendations can throw parents off. Of the more than 600 parents of 13- to 17-year-olds polled, one third didn’t know when their teen’s next vaccine was due and half believed their doctor would inform them when they should come in for it.

“Sometimes, for very good reasons, the schedule does change,” she says, and parents may need a change of mindset to be more on the lookout for those updates. “It’s a good thing to ask, it’s a good thing to make a well child visit appointment. Have a preventive care appointment for your teen or as the teen gets older, encourage that teen to make his or her own appointment.”

The consequences of delaying or missing vaccines can be dire. Teens are at an increased risk for meningococcal disease, for example, which can cause serious infections and even lead to permanent disabilities or death.

“If you’re waiting until 18 to get that meningitis vaccine, you’re putting your kid basically at risk for the first two years of what is a really clear increase in disease rates,” Clark says, pointing out the common misconception of waiting until just before college to get vaccinated. “There’s no benefit to waiting.”

The bottom line? “Ask,” Clark emphasizes. “Don’t assume that your teen is up to date.”

Which vaccines do teens need?

According to the Centers for Disease Control and Prevention, these vaccines are recommended for teens. Other vaccines should be given if a child did not receive them on schedule. Find the full schedule here and talk to your teen’s doctor about what’s recommended.