Physical Education Fun for Kids You Can Do Together at Home 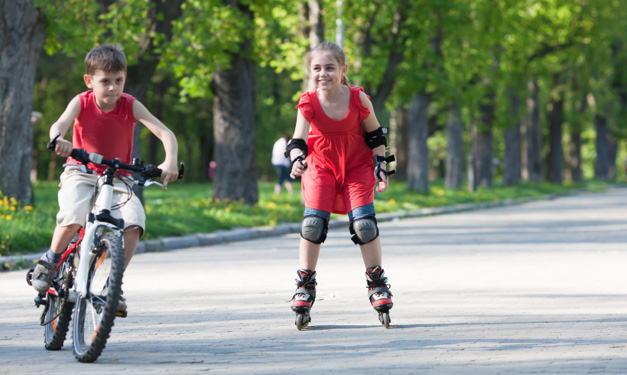 There are lots of reasons kids sit on their butts. But with a little creativity, keeping active and healthy is easier than you may think! We picked the brains of two physical education teachers with Detroit schools for some insight on keeping kids active. Robert Shank teaches at Harms Elementary School, part of Detroit Public Schools – and Ronald Kochan is at Hope of Detroit Academy, a K-8 charter school.

Get moving – get outside

“In the spring, easy sports like disc golf are great ways to get kids outside and moving,” says Kochan. “The key is just to find something your kids find fun and do it with them. Kids model their behavior after their parents.” Shank says evening walks in the park or neighborhood are easy ways to stay active and set an example.

“I encourage parents to look into Detroit PAL,” says Shank, who advocates strongly for afterschool athletic programs. “They have a variety of organized sports like volleyball, basketball, football – and sometimes offer discounted rates for families who may be struggling financially.”

Search your garage for play balls. Kochan says one of his most popular activities in class involves a few bouncy balls (dodge-ball sized or larger works great – the kind in dollar-store bins). “Have your kids make up some sort of game.” Or give them free rein. “Have them toss it up while running, kick it, juggle – whatever gets them moving.”

Look for chances to teach your child about sports and different rules of popular games. “Attend one of your local high school’s sporting events, which are often free admission or very cheap for tickets,” says Shank. If they show interest, have your kids follow the game and keep score or ask questions about rules they don’t understand.

Check out non-traditional ways to keep fit, too. For example, catch Detroit Derby Girls play a roller-derby “bout” on old-school skates at the Masonic Temple select Saturdays from March through June (up to two kids admitted free with a $12-$15 paying adult). Or catch the Detroit Curling Club in action in Ferndale to check out this ice game, which involves granite rocks and “brooms.”

“Younger kids absolutely love dancing,” says Shank. “Simple dances like The Hokey Pokey or The Twist can help them learn their left from right.” He says you can also teach your child about different cultures through exercise. “I use a CD called Feel the Beat: Funky Fitness Fun that features Latin and African-based dance songs.”

“With younger kids, it’s more about light strength training,” says Kochan. “Pushups or light arm or thumb wrestling can build muscles.” Shank suggests getting creative. “Toss water bottles or use soup cans to do arm curls. We’re not trying to bulk them up; just trying to improve grip and dexterity.”

“Riding bikes in the street can make a lot of parents nervous,” says Shank. “Try finding a park near you that has space for bike riding without the fear of traffic.” He recommends Clark Park in Southwest Detroit, but says many parks will have an area of asphalt where kids can ride their bikes all day, free from car concerns.

Attending Detroit sports teams’ games or even watching them on TV can be an opportunity for children to be inspired. “Take a look at someone like Justin Verlander,” says Kochan, of the Detroit Tigers pitcher. “He’s a star athlete who also does a lot of great things out in the community.” Or take Chauncey Billips, basketball player with the Detroit Pistons, who donates his time and money to local charities.

Hit the web for resources year-round. “I use ChooseMyPlate.gov, which gives links to nutrition and exercise tips,” says Kochan, plus exercise tips for those who haven’t been active in a long time and activities to increase your family’s physical fitness.