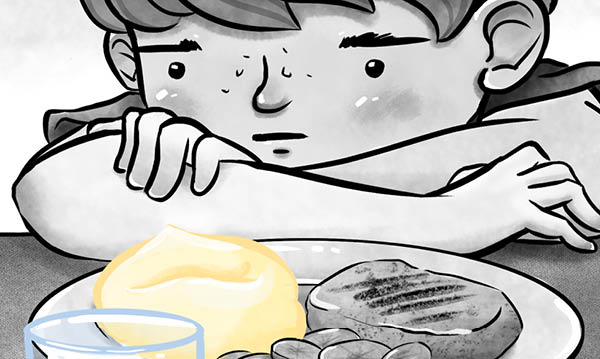 You’ve just prepared a meal for your family and, as soon as it’s on the table, a little voice declares, “I don’t like that. I don’t want it!”

Selective or picky eating isn’t merely a “stage,” says a new study published in Pediatrics, which associates it with anxiety, depression and attention deficit disorder.

Fourteen to 20 percent of parents report their preschoolers are selective with food. While kids are notorious for having certain food aversions, finicky eating isn’t as harmless as you’d think. Researchers examined 917 kids ages 2-6 and found their levels of pickiness were related to psychopathological issues, which worsened as selective eating became more severe.

Picky eating can be behavioral, sensory or both, Ferrise says. “When it’s purely behavioral, it’s going to be rooted in ‘I want the power.'”

Children may have had a bad experience with food, he adds, and as a result, they associate a particular food with a negative situation. Puking after consuming broccoli equals no desire to eat that vegetable.

“You can have the sensory challenges that drive more behaviors. You are asking them to try a food that they don’t like, and they are asking you for something that they do like,” he says.

When parents see that, they think kids are being picky – but they aren’t linking the sensory and the behavioral portion.

This can be incredibly frustrating for parents who simply want their kids to eat dinner, but don’t let that show.

“One of the most important things is this: You have to be as positive and neutral at the same time when you’re trying to get your children to eat,” Ferrise says.

Kids pick up on your attitude, so keeping it cool and saying things like, “Way to go!” and “You’re doing a good job!” can help.

And, because kids like control, he suggests giving them a choice. Set out two foods and let your child pick A or B. You’re allowing her to feel like she can control that situation.

Reward your children for trying new foods. Make sure these rewards hold value, he says. If your child loves the water park or movies, trade 10 food bites for a trip to one of these spots over the weekend. “On the flip side of that, if they don’t reach the goal, don’t give them the reward.”

But even in these cases, Ferrise suggests verbal praise. “Let them know that it’s OK that they didn’t reach the goal, but you’re going to keep working on it.”

Avoid sweet treats, he cautions. Your child likely won’t finish her meal, so telling her she can have cake when she’s done is really just setting her up for failure.

Also, don’t tell your kids they have to sit at the table until they’ve finished all their food. And absolutely do not force feed. “I think it teaches them to dislike food even further,” he says. “It teaches them to have trust issues with the person that’s trying to work with them,” he adds. This may cause other problems, too – issues that aren’t even related to food.

Each child is unique and requires different of strategies, which an occupational therapist or a behavioral specialist might be able to assist with. Consult your pediatrician if you notice a pattern.

“The longer we wait and we allow the child to become complacent in their setting, especially with food, the harder it’s going to be to make those changes,” Ferrise says.