This fitness trainer uses pole dancing - along with pilates and aerial yoga - to turn-on women across southeast Michigan to getting a great workout! 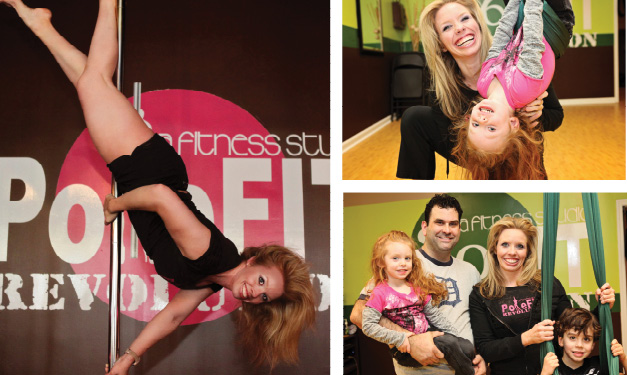 While driving her 5-year-old son to school for career day, Melanie Pagel casually asked, “What’re you gonna say mom does?”

True, Pagel makes sliding and spinning on a steel bar look effortless – and sultry. But at her bright, disco-ball-studded Madison Heights business, the ladies you’ll find on the 11 poles aren’t entertaining any, um, “gentlemen.”

“I’m here for the fitness side of it and the health aspect,” Pagel says. “I’ll teach anybody a pole dancing trick – and how to be beautiful on the pole.”

That warmth, paired with Pagel’s 14-year history as a personal trainer, has made PoleFit Revolution a magnet since opening two Marches ago.

In fact, it’s the only way she’s found to get women to “pump iron.”

Trolling YouTube, she became a quick self-study, playing with new poses. Pagel was struck by parallels with yoga and pilates, which she also teaches.

But as a young mom, there was another pull.

“It was a way to help me kinda feel like I was feminine again,” she says, “not just trying to have that perfect balance of being mommy and wife.”

The “thrill-factor” was a fit, too. As a kid in Utica, she did tap, jazz and ballet, then competitive cheer and gymnastics. Not that her parents pushed – “My mom doesn’t like to sweat,” Pagel laughs – but both keep active. (It apparently had impact: Her sister is a physical therapist and “workout nut.”)

So a sport with names like “Iron X” and “Twisted Ballerina” just clicked.
“There’s a lot of crazy moves,” Pagel says. “I’ve hit my Split Grip Aysha a couple times” – a coveted inverted pose. “That was a big rush.”

As her pole passion grew, Pagel started doing for-hire parties. Those got so popular she finally opened shop. “I didn’t want to have parties at my house!”

Her Bloomfield Hills home definitely has one, however.

“In the living room, of course,” she grins. “It’s a very good conversation piece. And it keeps the kids active. They like to try to climb it.”

Her hubby’s been known to take a crack at parties, too. “He swings like a man!” Pagel says. Mike, a contractor, has played a bigger role in building the studio, from ceilings and walls to rigging up six silky fabric hammocks.

“All of our classes help each other out,” Pagel says. Pole can create shoulder tension, for example. Aerial loosens that up and boosts flexibility. Call it cross training. Or yin and yang. “We try to keep that whole mind-body” balance, Pagel says. That’s also why one-student-per-apparatus is the norm. “It helps people stay warm, involved and work at their own pace.”

Like who? Moms, for one: They’re more than half the clientele, Pagel says, with most being in their 20s to 40s. She’s even planning a mommy-and-me aerial class this summer (her own two kids are already hammock junkies).

“She was doing more spins than the 20-year-olds – and lasted longer!” Pagel laughs. “Everybody wants to get their female swagger back.”

Still, Pagel knows there’s stigma – which is why she gave little Chase a bit of pre-career-day coaching. At PoleFit, misinformed calls are a battle. She once had to remove the studio from a website “that wasn’t for regular massages” (it generated lots of interest).

That aside, “There’s still always convincing,” she says. “People will either love you or hate you.” Yet she’s optimistic. “I think we are just in the beginning of the curve. I do think it will become more mainstream.”

Her theory: Be inviting. Come try it. “This is a really supportive and healthy environment. Nobody’s judging anybody.”

You could wind up addicted. Or uplifted. “Countless women have told me I’ve changed their lives for the better, giving them the strength and body they want and enhancing relationships, too.”

She hopes that’ll be what Chase and Gisela, 3, see: Pole dancing as an “artistic expression of dance, gymnastics and fluidity of movement.”

“What’s wrong with wanting to be sexy and feel confident with yourself?” Pagel says. “We are women, after all – we were designed to be sexy.

“How you feel inside will reflect on the outside.”

This story appeared in the May 2011 print edition of Metro Parent.