So your kid's first dentist appointment is coming up. Here, local moms offer tips for easing anxiety about the trip to the family dentist. 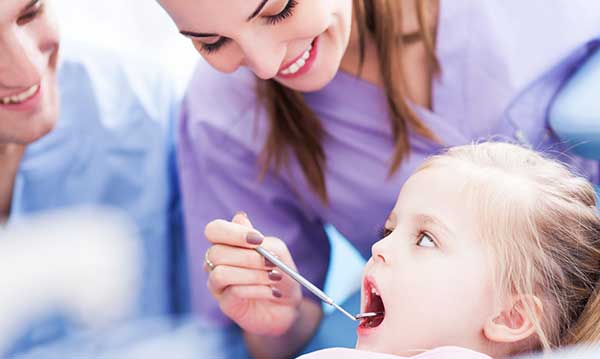 According to the American Dental Association, every year, millions of people grin and bear tooth pain because of a raging case of odontophobia, or what laymen simply call “fear of the dentist.”

These are grown men and women who’d rather be in pain than to remain still and slack-jawed while their pearly whites get probed and polished.

So imagine how scary it can be for kids. First dentist appointments mean that bright light shining in their face! Sharp metal tools tapping on their teeth! All that rinsing and spitting! But properly preparing your kids for their first exam can go a long way in easing their anxiety.

When planning your child’s first dentist visit, age comes into play. According to the American Academy of Pediatric Dentistry, children should see a dentist when their first tooth comes in or by their first birthday. That’s when early tooth decay – also called “Early Childhood Caries” or ECC – can start.

Suzanne Oesch of Roseville, who followed the AAPD guidelines, says that going early was key to putting her child at ease.

“He has been back a second time already and has no issues with the dentist putting his fingers or tools in his mouth,” she says.

Canton mom Jennifer Quaayhackx Moore didn’t have it as easy with her daughter, who had cavities filled at age 2. “She had difficulty at first because her first couple of experiences were pretty scary, but if we had waited until she was older, it would have been much worse.”

Sometimes letting your child see you have the experience – and survive – can make her braver. Take your child to the dentist for your cleaning appointment, so she can see your exam before having her own. You can also ask the technician to show your child the different tools before they’re actually used on her teeth. Or ask the dentist to peer into your child’s mouth for just a minute or so before she has her first official visit.

“My dentist encouraged them to come to every appointment after they were born,” she says. “When they were old enough, they got to ride the chair and to get their teeth counted. By their first appointment, they were pros.”

Big day or no big deal?

Lauren Mento of Macomb prepared her son for his first visit to the dentist by ginning up excitement instead of fear.

“We made a big deal about it a few days before, explaining what they were going to do,” she says. “We kept emphasizing what a big boy he was.”

For some parents, that “big day” build-up includes reading picture books about going to the dentist for the first time.

“My oldest daughter thrives on details, so I thoroughly explained what the dentist would do, showed her pictures of the different tools, and answered any questions she had,” says Colleen Valderlinden of Harper Woods.

Other parents take the opposite approach. “I didn’t make a big deal out of it,” says Meg Buckley of Oxford. “He did great and had no problems at all.

The point is to prepare in the way that will make your child less spooked. And for all of those parents suffering from odontophobia, Melissa Shilling Humbyrd of Rochester Hills offers this advice: “Never talk negatively about the dentist. Kids overhear that; then they become scared.”