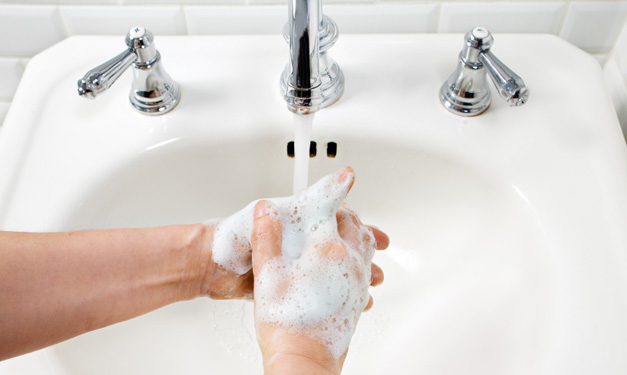 Achoo! Are sniffles, sneezes and sore throats afflicting your little angel? You’re not alone. Colds and bouts of stomach flu are the most common reasons kids miss school, according to the renowned Mayo Clinic. Pink eye and strep throat are close behind.

1. Get immunized. Simple shots halt many childhood diseases, from measles and mumps to influenza and chicken pox. Most inoculations start at birth and continue through 24 months, according to the Every Child By Two campaign. Boosters and vaccines can continue throughout life.

2. Keep it clean. Turn on the faucet and get the soap sudsy after dirty tasks like nose wiping, diapering and toileting. Wash up before and after eating, too. Don’t forget instant hand sanitizers! They kill up to 99.99 percent of germs, and the antiseptic sorts don’t allow resistance to build up.

4. Yogurt and water. Fluids are vital to keeping the immune system functioning properly and avoiding breakdown through dehydration. Beneficial bacteria in yogurt could beef up resistance to gastrointestinal infection and even cancer, according to the National Yogurt Association.

6. Antibiotic caution. These powerful drugs zap most bacteria behind strep throat and ear, sinus and urinary tract infections. They have zero power over viruses that cause colds, flu and most coughs and sore throats, the U.S. Centers for Disease Control and Prevention says. Children who often take antibiotics can develop resistance and get sick longer. Use only when necessary and exactly as prescribed.

7. Get engaged. Good mental and social development is critical to kids’ overall health and well-being. On top of addressing those basic needs, be sure to talk, play and provide a stimulating environment for your child.