Reports of Measles Up Nationwide, States Include Michigan 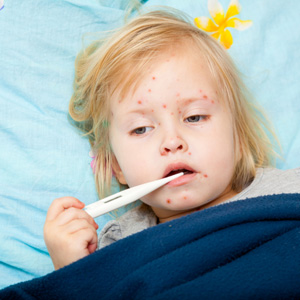 If your child has not been vaccinated for measles, you may want to take note. As of mid-August of this year, there has been a significant uptick in measles cases across the country, with 16 states reporting a total of 159 cases, as reported by the Centers for Disease Control and Prevention, or CDC. Michigan is home to two of those cases, with a third currently under investigation.

"We are very concerned about this," says Dr. Charles Barone, chair of pediatrics of Henry Ford Health System. "Measles is the most contagious and infectious disease we know of – even though it's not very common here in the U.S."

That's because measles, a viral disease that is very easy to transmit through direct or airborne contact, was virtually eliminated in the U.S. by the year 2000 after years of immunization efforts to eradicate the disease through vaccination.

While danger of the disease still existed through "imported" cases involving infants and other unvaccinated people who travel, the average number of reported measles cases between 2001 and 2012 hovered at a mere 60, according to the CDC. That's compared to the millions of cases reported each year before the vaccine's debut in 1963.

Looking at the increase

"We have an increase of travel abroad, and more people are opting-out to have their children vaccinated," says Barone.

Both of the cases from Michigan involved infants younger than 12 months who had traveled out of the country.

"The earliest we give the vaccination is 12 months, so we always have a population of 0 to 1 (years of age) that is susceptible," Barone says. However, "if someone knows they are going to be traveling overseas, we can vaccinate as early as 6 months."

According to the CDC report, nearly all of this year's cases were directly or indirectly related to exposure in different countries. Regardless, 82 percent of the cases this year occurred in people who were not vaccinated.

"A lot has to do with bad science about vaccines," Barone says. "There is a hesitation with parents for fear of things like bad reactions to the vaccines and theories out there about them causing autism."

Vaccination numbers are indeed down. A 2012 study by the New England Journal of Medicine found that more parents were opting-out of vaccinating their children, claiming non-medical reasons for their exemptions.

Fever, cough and runny nose are common symptoms of measles. Telltale signs like skin rashes and Koplik spots (clustered red markings inside the mouth) are the most recognizable signs of the disease.

While adults who are not vaccinated can get the virus, it is "non-vaccinated, immuno-compromised children (who) are most at risk," says Barone. This includes children who are sick, malnourished or have HIV or cancer.

"For example, even though more children with leukemia are surviving, they are left with a weakened immune system, which leaves them vulnerable to something like measles if they're not vaccinated."

The only way to treat measles is by quarantining the patient and letting the virus run its course – and the best defense against measles is vaccination, according to Barone and the CDC. If you are planning on traveling out of the country with your infant, your pediatrician will likely recommend the early vaccination. Talk with your health care provider if you have questions regarding measles or its vaccine.