Television, iPads and smartphones: children are so plugged in that it's actually affecting their sleep habits, according to a new study. 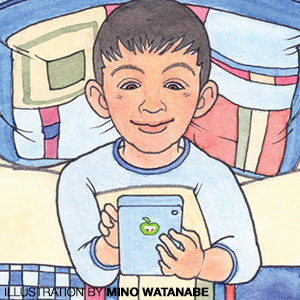 Whether you’re an adult who spends all day working and taking care of your kids – or you’re a child whose schedule consists of school and sports, there’s nothing better than curling up in a cozy bed after a long day and unplugging from the rest of the world to sleep.

Not so fast. All of that seems great, but it’s not the norm to completely unplug these days. In fact, more and more people are keeping their smartphones, computers and televisions on during sleep time.

So, whether it’s a text message, a Facebook alert or an email, the noise at night is a disturbance. And for many, once you’re awake, it’s tough to go back to sleep.

According to a new study from the National Sleep Foundation, kids are not getting the required amount of sleep they should be – and technology is the culprit.

Turns out we actually get conditioned to wake up to these sounds, says Dr. Charles Barone, the head of pediatrics at Henry Ford Medical Group. It’s “the simple brain stimulation at the time when you’re supposed to be shutting down,” Barone says.

Because kids and adults are so tuned in – and “must” know what’s going on at all times – it can be impossible to achieve the proper amount of sleep.

The National Sleep Foundation’s Sleep in America poll, which is an annual study that began in 1991, was released in early March and reports that 84 percent of parents with kids ages 6 to 17 had at least one of the following electronics in their room at night: television, smartphone or tablet, laptop or desktop computer, video game or music player/radio. And roughly three out of four of those kids reported using at least one of those devices in their room when they were actually supposed to be going to bed. Some even leave these electronics on while they are sleeping.

Kids who did turn their screens off on school days reported a higher quality sleep.

It seems like a great option to be available at all times. For kids, they want to stay plugged into what is going on with their friends, and for adults, it’s all about staying in touch with work and family.

But if you’re not sleeping soundly each night, it can affect your overall health – and, according to Barone, it can have quite an impact on your child’s academic performance.

That’s why it’s extra important to ensure that your kid is getting proper sleep.

“They should be turning off all their devices,” Barone suggests. In some cases, you might have to take electronics out of the room altogether. Ditch the television, Barone says, for two reasons: You can’t monitor what your kids are watching and you can’t guarantee that they will turn their TVs off at a decent time or sneak it back on after you’ve dozed off.

Barone also suggests that parents take a peek at the Children’s Sleep Habits questionnaire, which asks parents to rate a series of questions related to their child’s sleep – including “child goes to bed at the same time at night” and “child needs parent in the room to fall asleep.” Parents rate these questions from “0 or never” to “7 or always” – and then end up with a score at the end.

Barone says taking this information along on a routine wellness check will give your child’s doctor a more concrete snapshot of his or her sleep quality.

And, just like with any other behavior, leading by example is imperative, so parents should shut down their devices before bed, too.