Shorter days can have a negative impact on your child's mental health. What should parents know and do to help with seasonal affective disorder? 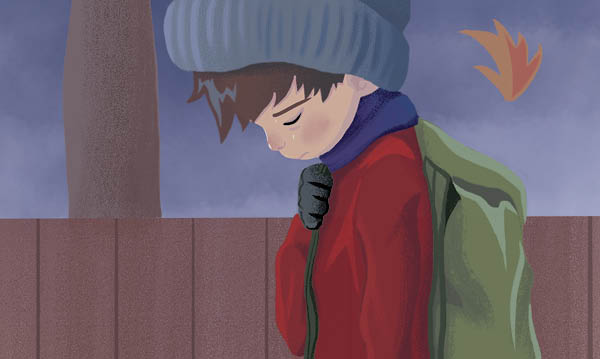 Michigan winters are long. The days are short and the cooler temps cause us to hibernate way longer than we’d like. And, while the excitement of the holidays is ahead, the longest few months for families follow shortly after.

It’s tough enough as adults, but for kids it can be just as bad. Combine the short days with busier school schedules and more responsibility, and that could be a prescription for seasonal affective disorder (SAD).

“It’s a form of depression that follows a seasonal pattern,” and usually resolves when spring approaches, says Dr. Arunima Jayakar, a family medicine physician at St. John Hospital & Medical Center in Detroit. “Melatonin and serotonin play a role in this. Melatonin increases as days get shorter – it promotes sleepiness. Serotonin decreases with less daylight, and that can causes depression.”

While the American Academy of Pediatrics reports that 1 million children suffer from SAD, Dr. Adelle Cadieux, a pediatric psychologist at the Helen DeVos Children’s Hospital in Grand Rapids, says the issue – now known as major depressive disorder with seasonal patterns – is often overlooked in kids.

“It is largely undiagnosed because it’s not screened for routinely,” says Jayakar of SAD, which she notes is common in 3-5 percent of those ages 9-17 – and happens more frequently in girls.

Many of the symptoms can be ignored as common teen moods. But if you notice a shift in your child’s behavior around this season, pay attention. It could be SAD.

Here are some signs to look for and advice on treatment options for mild and severe cases.

SAD is often mistaken for ADHD, Jayakar notes. However, the major differentiator is children with SAD are more withdrawn than those with ADHD. Fatigue, lack of desire to socialize with friends and family, lagging motivation, sadness and irritability are just a few indications. If your child is much more negative and down on himself, giving up more easily or becoming more frustrated, consider these signs too, Cadieux says.

“We can also just see changes in their eating and sleeping habits,” Cadieux says. “Particularly with seasonal affective, we see an increase in sleep and increase in eating.” Kids may tend to overeat sugary foods, Jayakar adds.

Grades can start to slip, too, which could cause the child to fall behind in school.

These factors aside, Cadieux says, “The other thing to keep in mind is, just like with depression, kids with seasonal affective disorder can also have suicidal thoughts and suicidal behaviors.”

While such feelings can go away once spring hits, they shouldn’t be taken lightly.

Pay attention and get help

Think your child is acting different? Try asking other parents who know your child if they’ve noticed the changes, Cadieux suggests. Chat with your child’s coach or teacher, too, for additional feedback. Then, it’s time to talk to your child’s pediatrician. Your kid’s doc is a good place to start, since parents are usually more comfortable with him or her.

Depending on how mild or severe your child’s SAD is, there are different treatment options.

Exercise helps, so encourage kids to get moving – and even exercise with them. Jayakar suggests parents spend quality time with kids and help them with homework.

Spending more time outside taking advantage of the little daylight we have in Michigan during the winter could also help a child with a mild case of depression.

“You can use full spectrum light bulbs in the lamps in your house, and that can provide at least a little bit better simulation of sunlight,” Cadieux adds.

Phototherapy, which uses light to treat mental and physical illnesses, is an option for those with a more severe case. Both physicians say medication may also be part of the treatment for kids with SAD.

Counseling can help, too. “For families that are ready to just go ahead and do counseling, first you can start with your insurance company, which usually has a list of providers,” Cadieux says. Then check out potential therapists’ websites for brief information on their specialties. “It can help a parent navigate that challenging system of providers that are out there,” says Cadieux.