Does your talkative child freeze up in social situations, become unresponsive and doesn't participate in activities? She may have selective mutism. 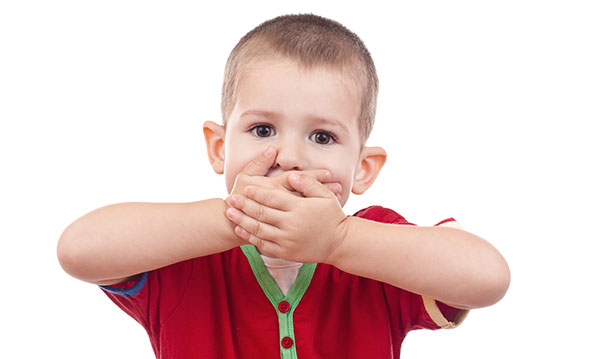 Not every kid sings language’s praises. But most children are notorious chatterboxes. Once they begin to master language, they typically seek every opportunity to let parents and peers know it – unless they’re shy, then their brave talking may take more time to burst forth.

But what about the children who meet new relatives or begin preschool and a month or two passes and they haven’t spoken a word? They may have a rare disorder called selective mutism – also known as SM – that stems from extreme bouts of social phobia.

Here, Dr. Georgia Michalopoulou, PhD, LP, the chief of staff at the Children’s Hospital of Michigan, maps out the disorder and dispels common SM myths.

What is selective mutism?

The term “selective” insinuates that those with SM choose when, where and to whom they wish to speak, but it’s not that simple.

They’re not defiantly discriminatory with their words.

“They want to have friends,” she insists. “They enjoy interacting with their peers, but they feel unable. They may only talk to certain children. They may whisper. They may try to communicate with kids nonverbally. They may have a blank facial expression. Others may not be able to smile or make eye contact.”

Those diagnosed with SM makeup less than one percent of children in the U.S., Michalopoulou says, which is why conclusive research to combat the disorder is even rarer.

SM typically develops early, between ages 3-4, but often isn’t observed until the child begins school, she says, since most kids with SM are chatty at home.

Experts previously theorized that kids with SM were autistic, that it served a means by which children exerted control or that they suffered a speech impediment. While a child can have such comorbidities and selective mutism, one is not a shoe-in for the other, Michalopoulou says.

Now, experts consider genetic components. If the child’s family history is one threaded with anxiety disorders, the child’s more likely to acquire SM.

Many ask, couldn’t the child just be shy?

Michalopoulou says, “the way to discriminate is by observation. If the child is very animated at home but has difficultly with other social situations, or even speaking with grandparents and cousins” to the point they cannot function in daily activities, that’s cause for concern.

How to help your child

No parent gets a kick out of watching his child struggle, but don’t allow her to point or make noises toward objects she wants. Don’t let the child avoid every play date and human interaction.

“It can become quite damaging to the child if they engage in that behavior for an extended amount of time,” she says. The child develops a pattern that acts as a crutch and only augments his social isolation that can lead to needs, like “even asking to use the bathroom” when mom and dad aren’t around.

“Understand that it’s a behavior that comes out of fear and worry, and try to help the child by comforting the child – ‘I understand that this is difficult,'” and tell them you’ll seek help to make it easier for them to talk in discomforting situations, she adds.

“It’s good for parents to encourage the use of language as much as possible. Ask the child to be specific – ‘I love it when you use your words to tell me how you feel or ask me for what you want.’ ‘I enjoy hearing you talk to grandma.’ Praise is likely to increase the child’s desire to engage in that interaction.”

SM stems from communicative anxieties, so despite what people say, experts will tell you the child’s not likely to simply outgrow the problem.

Those who seek psychotherapeutic help may overcome selective mutism between ages 8-10, but Michalopoulou insists it all depends on how quickly the family begins proper treatment.

She says start with a pediatrician and ask about a multimodal evaluation to rule out other possible causes.

Once you have a diagnosis, “this disorder is treated in two ways – one is through psychotherapeutic interventions and the other medication,” typically light antidepressants or antianxiety meds.

“If parents have their own history of anxiety or similar experiences, it could serve as an early kind of heads-up. If they see that the child seems to be shy and these behaviors remind them of how it was for them (as children),” don’t wait to intervene.

The key to combating any anxiety disorder is a proactive approach and early intervention.