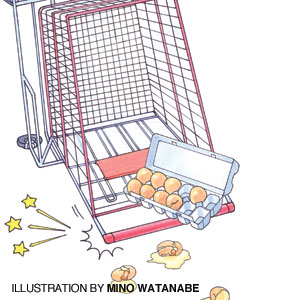 Crowded aisles, long lines and pleas for some junk food from the kids. It’s the average visit to your local grocery store. Yet week after week, you grab your list and brave the trip without thinking twice.

However, there’s one aspect of that weekly outing that you should give some thought to: the shopping cart.

According to a new study, 66 kids visit the emergency room each day for injuries related to shopping cart incidents. And these injuries aren’t minor.

“I would say by far at Beaumont, the majority of the things we see are head injuries,” says Erica Surman, a registered nurse and pediatric trauma program manager at Beaumont Children’s Hospital in Royal Oak. These injuries include skull fractures, brain bleeds and concussions.

And they’re most common in kids ages 5 and under, Surman says, because at this age kids are “top heavy.”

The study, conducted by researchers at the Center for Injury Research and Policy of The Research Institute at Nationwide Children’s Hospital in Ohio, looked at data among kids ages 15 and younger who were treated in emergency rooms in the United States from 1990 until 2011. It found that 530,494 children suffered injuries related to shopping cart incidents. That’s 24,000 children each year – or one kid every 22 minutes.

The ASTM International standard for shopping carts has been adopted as a way to minimize falls and educate parents on proper use of shopping carts. This standard requires that shopping carts have an adjustable restraint system that must work properly. However, kids are still getting hurt.

Scherer, who has worked in several positions at Kroger for the past decade, says that many children are not buckled in the seat.

“Usually, (kids) are not placed in the portion they are supposed to be in,” Scherer says. Instead, they’ll be standing on the cart or riding on the front of the cart.

As for babies, Scherer has witnessed parents putting their infant’s car seat on the cart – which, as Surman says, could lead to tipping.

Also, he adds, parents “might go off several feet away to get an item and they are not watching their kid.” As a result, the child may then fall out of the cart.

In his years at Kroger, Scherer says he’s never witnessed an accident so severe that an ambulance was called, but he does see many families misusing the carts. For parents that aren’t sure, Scherer says, “Usually in the front of the cart, where the kid would sit, they have a little flap … it actually has a diagram.”

Surman is a mom of three – two sons ages 13 and 11 and a 4-year-old daughter – and says she understands how difficult is it to shop with the kids. She suggests a few ways to ensure safety for your child.

Try to bring along a helper – an older sibling to help push a stroller, a niece or nephew, or even a friend.

Have an infant? Place him or her in a sling, such as a Boba Wrap or Baby Björn, to carry the little one close to you as you shop, Surman suggests.

In an effort to address the infant car carrier issue, some southeast Michigan stores – including seven Hollywood Markets and two Walmart Supercenters – have equipped carts with “Safe Dock.” This system is designed to hold carriers of any brand securely in place, right where a child would usually sit (you can find stores that have it near you by searching the Parents for Safer Shopping Carts website).

Still, the American Academy of Pediatrics recommends not putting your tyke in a shopping cart at all. But if you absolutely have to, buckle the child in and keep your hands on the cart at all times.

Or consider doing some shopping online. “If you’re thinking about shopping – the big bulky shopping that takes the bulk of your time – think about an Amazon Prime account,” Surman says. It runs $79 per year and offers two-day shipping on millions of items – including batteries, toilet paper, coffee and more. Surman suggests this service for non-perishable items – so when you go to the grocery store, you can just worry about purchasing the perishables.

Want to get meat delivered to your door? Surman suggests Michigan-based John Henry’s Meats, which delivers to most cities in metro Detroit twice each week, as an option for parents looking to cut down on time spent at the grocery store.

No matter what you choose, make sure it works best for your family.

“If you know how important it is and you do a little planning, those are your options,” Surman says.