Cold or flu got the kids home from school? Local parents share sick day survival tips with these seven ways to add a little TLC to a day or two at home. 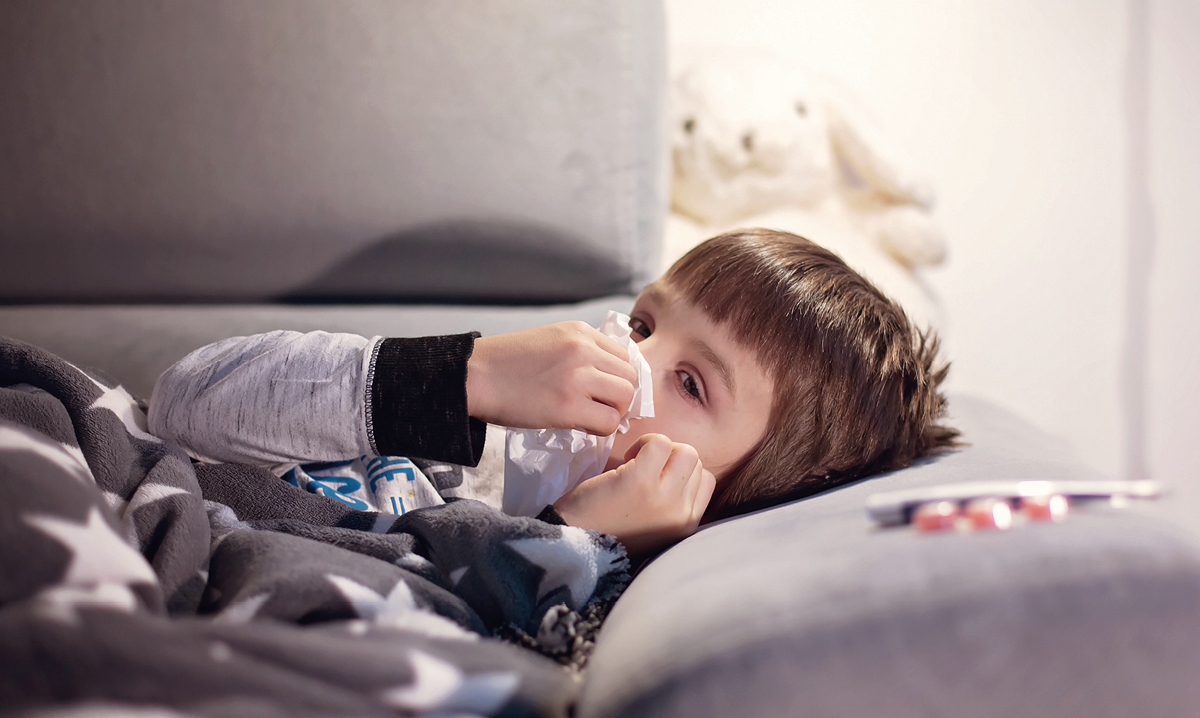 In turn, they’re the leading cause of missed school days. That leaves many families setting up “home hospital” while nursing kids through those various childhood illnesses – and facing the prospect of sick day survival.

After all, tending to a bedridden brood demands juggling and patience. But battling the bug also can be a time for your family to slow down, be pampered and reconnect.

Here’s how a few local parents have soothed high temps with TLC. Try some of their sick day survival tricks for yourself.

When a cold sets in, strategically set the scene. Feather the family futon with extra pillows and thick blankets, maybe stoke the fireplace – and ensure the barf bucket and cleaning products are within easy reach.

“The mattress comes downstairs, in front of the TV,” says Anne Kennedy. She runs Annie’s Children’s Center in Ann Arbor, and she has six kids herself.

“To them, it’s a special treat. For me, it’s to keep them off the carpet if they’re going to puke!”

The small stuff can bring a sense of security – especially when the next wave of nausea could strike at any moment. For Lisa Macomb, a mom of six and registered nurse in metro Detroit, that’s included “The Ashley Blanket”: a pink flannel in the shape of a heart, made by her son’s ex-girlfriend.

“Whenever anyone’s sick or cold, we’re always fighting over the blanket,” she says. Or keep a “sick day kit” on hand, packed with small toys, games and a few goodies (like a few tasty lozenges).

Reading aloud a cherished book can be soothing, but can demand more of zoned-out kid’s attention, while tying up yours. That’s where, at least in the early stages, a favorite flick wins out.

Kennedy says that for her boys, getting to watch Pirates of the Caribbean on a weekday afternoon has served as an out-of-the-ordinary bonus. It’s also a chance to slip in some constructive chat about what’s on the tube.

Although it may not stop the sniffles, hands-on care is a remedy in its own right – whether a hot water bottle or mentholated massage.

Stay-at-home dad Keith Peters of Bloomfield Township would use TV time on sick days to snuggle with his daughter, 6 years old at the time of his interview with Metro Parent, on the couch, and rub her back.

While that wouldn’t fly with his older sons, dad instead held a cold washcloth to their foreheads.

Viruses can make little tummies a volatile place. Since replenishing liquids is vital – particularly when there’s vomiting – Kennedy pours Vernors soda for stomach bugs, and doles out Popsicles for fevers.

Her husband’s also fixed up staples from his childhood sick days, like chicken noodle soup and cheese bread. When those solid foods start settling again, Macomb might whip up Jell-O or run to McDonald’s for a rare milkshake.

They’re still stuffy, but out of bed. During this typical Day Two scenario, parents can still spoil a bit – while easing kids back into productivity. Rory Macomb, Lisa’s youngest, would get special time with mom in the kitchen.

The art-loving Kennedy kids would tote out the gooey and messy stuff, like Play-Doh and scrapbooking supplies.

And, whether to play board games or just talk, Peters says he put the small stuff on hold. “The laundry may be piling up,” he says, “but I’m just going to be hanging out with them.”

Typically, most colds wrap up within two to three days, says Sue Zacharski, who’s worked as an elementary school nurse in Pontiac. Toward the tail end, get kids back on track with a few everyday chores, like tidying the bed or getting the backpack prepped.

And, if the sick time is a bit longer, some homework won’t hurt.

“Many times, children shouldn’t be in school, but they’re not too sick where they can’t be doing something,” Zacharski says.

What do you do with your kids when they’re home sick from school? Share your sick day survival tips in the comments.