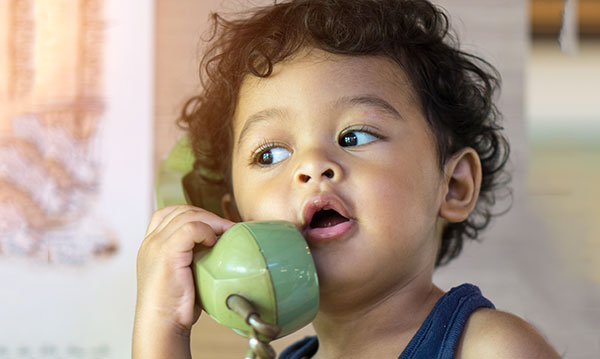 My two-year-old son is barely speaking. He says a few words here and there, but compared to his cousins, he is speaking far less than they are. Should I be worried? What can I do to help him?

Speech development is one of the most critical skills a toddler will develop, but the rapidity with which they develop speech is widely variable. Some children will develop speech much more slowly than others. This can indicate a developmental problem and should be evaluated by a pediatrician. Most of the time, late developing speech is just a normal variation. Children that are exposed to multiple languages at home will often speak later but once they begin speaking they will speak all of the languages well. I see many children exposed to three or four languages and they often do not speak well until they are 3 or even 4 years old but when they do finally speak fluently they do so in all of the languages to which they have been exposed.

You can help children develop speech by speaking to them as you would any adult. Baby talk is counterproductive and should always be avoided. Pointing to things all day long and asking your child to name them comes across as a game and is a great way to encourage speech. Also, keeping a continual stream of speech while you are together is very helpful. Think of your life as if you are a commentator at a sporting event. Describe everything you are doing. For example, "Now I am going to get your diaper, now I am getting your wipes, now I am going to lay you down, now I am going to wipe you off and put on a new diaper. Now I am throwing it in the trash, etc." It sounds kind of silly but it will expose them to many more words than being silent will. Reading to them is also a great way to encourage speech and while reading ask them to name things on the page. Say "what is this" and point at a cat, dog, car, tree or whatever is on the page.

If you continually expose them to words and do not talk to them like a baby they will eventually begin speaking much more. Given time and enough encouragement you will have your child speaking so much you will wish for some peace and quiet.

Looking for a podcast you can trust to give facts about important topics? Look no further.
Read more
Things to Do