A recent study found that tackle football may lead to long-term 'neurobehavioral consequences.' 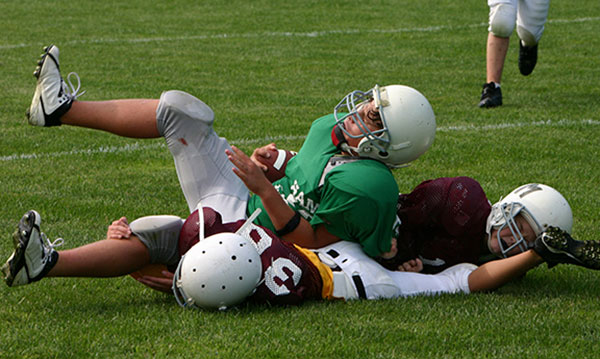 Parents who aren’t sure about their young kids playing tackle football might have another reason to be concerned.

A recent study found that kids who play tackle football before the age of 12 have more difficulty controlling their behavior.

“This study adds to growing research suggesting that incurring repeated head impacts through tackle football before the age of 12 can lead to a greater risk for short- and long-term neurological consequences,” says Michael Alosco, the study’s lead author and a postdoctoral fellow at Boston University School of Medicine, in the article.

A previous study also from Boston University found a link to memory issues and other cognitive issues among former NFL players who started football before the age of 12, USA Today reports.

“The brain is going through this incredible time of growth between the years of 10 and 12, and if you subject that developing brain to repetitive head impacts, it may cause problems later in life,” he says in the article.

That means that football, already considered one of the most dangerous sports and one of the most expensive sports, could be more risky than parents realize. With the dangers of repeated concussions in the news more than ever, moms and dads could be left wondering what to do. Is it worth the risk?

A recent Washington Post staff editorial published after the study was released made the case that kids are too young to make that call. The article pointed out that even one of the Boston study’s authors said kids shouldn’t be playing tackle football based on “logic and common sense and the growing totality of the research.”

“Yes, there is some risk in most sports, but the emerging evidence seems to put football in a category of its own,” the editorial concluded.

The idea of a recommendation against tackle football for kids isn’t new. In fact, some people have even suggested state bans against it.

The American Academy of Pediatrics hasn’t issued a recommendation against the sport, but the group does have recommendations for making it as safe as possible. That includes rules of proper tackling, educating players about the risks, expanding non-tackling leagues and having skilled athletic trainers on the sidelines.