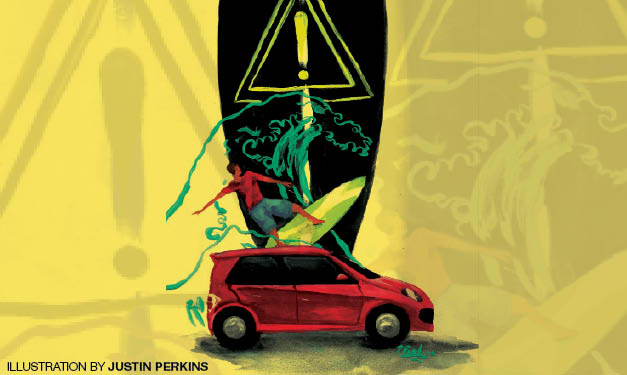 Remember that scene in Teen Wolf where Michael J. Fox is standing on the roof of a moving van? He’s dancing and goofing off while “Surfin’ USA” is playing. It’s all in good fun, right?

Except that adolescents attempting to copy this stunt have been seriously hurt – and, in some cases, died.

Called car surfing, this activity involves an individual riding on the exterior of a moving vehicle (usually the hood, roof or trunk). Variations, like hanging on the sides or being pulled by a rope, are also popular.

At least 99 people have died or sustained serious injuries as a result of car surfing since 1990, according to a 2008 article from Morbidity and Mortality Weekly Report. A Centers for Disease Control study found the average age for related injuries is 17. But injuries spanned ages 10-37, so car surfing isn’t limited to teens.

Clinical psychologist Dr. Jennifer Powell-Lunder says although teenagers have the ability to use abstract thinking and can understand the consequences of their behaviors, they still often don’t believe they are at risk. By nature, teens are egocentric, which is due to brain development.

“As a result, they often believe that nothing bad will happen to them. We call this ‘the illusion of invulnerability,'” she says. “Interestingly, they are able to see the risk of engaging in certain behaviors for others, like a friend or family member – but not for themselves.”

Does this mean teens shouldn’t be allowed to drive? Statistically, increasing the age limit for driving might save thousands of lives, author and California traffic school instructor Walter Meyer says. While teenagers make up only 4 percent of drivers, they cause 10 percent of fatal accidents.

“I do think the age for licensing should be 18 – in just those two years, a lot of maturing takes place,” he says. “Anything higher than 18, although safer, may just be a little too impractical for our society. But in the UK and Germany – and many other countries – it is 18.”

Absent that, there are still ways to prevent your teen from participating in such risky stunts. Your best bet? Effective communication, Powell-Lunder says.

“Essentially, it is important for parents to be a real presence in their kids’ lives,” she says. “This doesn’t mean they hover. It means they stay connected.”

Ask teens about their thoughts on possible consequences of such actions – and validate them when they express realistic concerns or fears, Powell-Lunder says.

In addition, parents should model safe driving practices, like refraining from texting and driving.

“Parents should also avoid talking about ‘the good ol’ days’ of their adolescence when they engaged in these type of behaviors,” she says. “This sends a mixed message to teens.”