How to Stop Grinding Teeth at Night 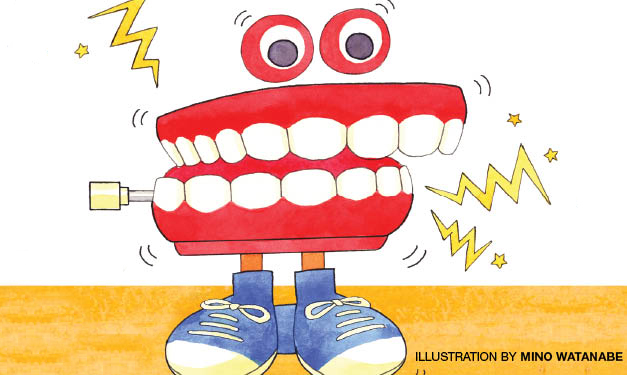 Deep, even breathing, blankets softly rustling, the occasional sigh – the sweet sounds of children asleep are music to a weary parent’s ears.

Until the serenity is pierced by the unmistakable noise of grinding teeth. When I tiptoed past my slumbering preschooler’s bedroom one night, I heard her peaceful sleep sounds shattered by the bone-rattling, fingernails-on-a-blackboard racket of her tiny teeth, gnashing away.

I lapsed into a moment of parental panic. Surely, this would damage her teeth! Did she do this every night? Was she overstressed? Should I wake her?

The grinding noises tapered off after a few minutes, but my questions continued.

Many parents will hear their children’s teeth grinding at some point. In fact, a study in Journal of Dentistry for Children found that more than a third of parents report the condition in their children. “It can get pretty loud,” admits Paul Bussman, D.M.D., F.A.G.D.

Though teeth grinding, or bruxism, may be alarming or worrisome, “It’s generally a normal part of the growing process,” he says.

Grinding can begin in babyhood – as soon as children have teeth to grind – and generally starts to subside as the permanent teeth begin to erupt, says Bussman. The condition commonly disappears on its own in childhood, but a small percentage of kids will continue to grind as adults. Severe or persistent grinders may suffer facial pain, earaches, jaw joint disorders, damaged teeth and disturbed sleep.

According to Dr. Khaleel Ahmad, researchers haven’t pinned down a cause for bruxism. Genetics may play a role; if either parent grinds his or her teeth at night, children are almost twice as likely to grind their own.

Daytime stress and medicines like amphetamines have been associated with bruxism. Interestingly, nearly a third of grinders also bite their nails, and over 20 percent suck their thumbs, Ahmed says.

If your child’s teeth have become nighttime noisemakers, here are some tips for coping.

If grinding regularly interferes with sleep or if a child complains of pain in her teeth or face, see a dentist. In severe cases, a dentist may prescribe a nightguard made of soft plastic to protect the teeth and the jaw joint. Occasionally, grinding is associated with a misaligned bite. If that’s the case, a pediatric dentist will refer your child to an orthodontist.

Thankfully, my little bruxist has eased up. But if I hear more teeth-gnashing noises coming from her room, I’ll be better prepared – and I’ll worry a lot less.