Things to Know About Language Development in Toddlers

At what age do babies talk and how can you help with language development in children? Nancy Kaufman of Kaufman Children's Center provides info for parents. 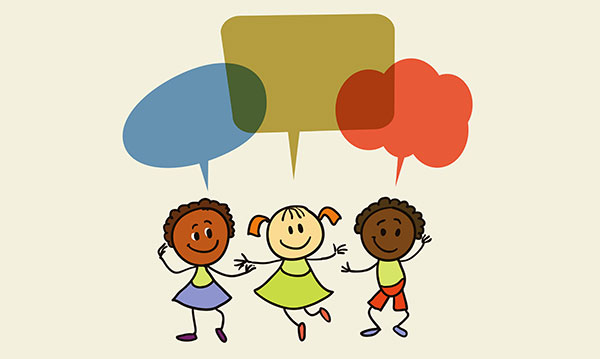 Hearing your child speak his or her first words is a moment to cherish. But when should parents expect that to happen, and how can they help their child build language skills?

Nancy Kaufman, a certified speech and language pathologist and owner and director of the Kaufman Children’s Center in West Bloomfield, says that kids typically speak their first words between 12 and 18 months of age.

“Boys are sometimes delayed,” she adds. “But typically by age two, a child should be combining two-word utterances even if not particularly well enunciated.”

Kaufman notes that if a child is not doing so, he or she should be evaluated by a speech and language pathologist.

“This does NOT necessarily mean that a child has a speech or language disorder,” she cautions. “It may just mean he or she is delayed.”

Kaufman offers tips for parents to help stimulate language development in their babies and toddlers. One such tip is to have the child fill in the blank to a familiar song.

“Especially songs that repeat,” she notes. “So for example, the parent can sing, ‘If you’re happy and you know it, clap your…’ and let the child chime in with the word ‘hands.'”

Another tip is to anticipate what a child wants from the refrigerator or the cupboard and then say that word to the child.

Kaufman recommends parents generally expose their baby or toddler to a large vocabulary and suggests sometimes using a thematic approach to do so.

“For example, during dinner, talk about what everyone is eating,” she says. “Talk about the different colors of the food, but don’t expect a response.”

Another practical tip Kaufman offers is for parents to put words to familiar games they play with their child.

“This works well particularly for action-based games,” she notes. “If, for example, you like to give your child airplane rides, call it the airplane ride. Eventually the child will ask for what they want, especially in the case of highly preferred activities.”

“Repeat words when doing activities,” she says. “You can say to a child who is painting, ‘You’re painting. I like the way you paint’.”

Kaufman does caution though not to talk too much.

“Sometimes when parents talk too much, kids can’t pick up on the salient words,” she explains. “Keep your comments short and sweet emphasizing a specific noun, verb or adjective.”

Kaufman also cautions to use proper inflection when talking with very young children.

“Don’t say ‘big truck?’ like it’s a question,” she explains. “Otherwise the child will begin to say it that way too. Model the language in a way that makes sense for the child to speak it.”