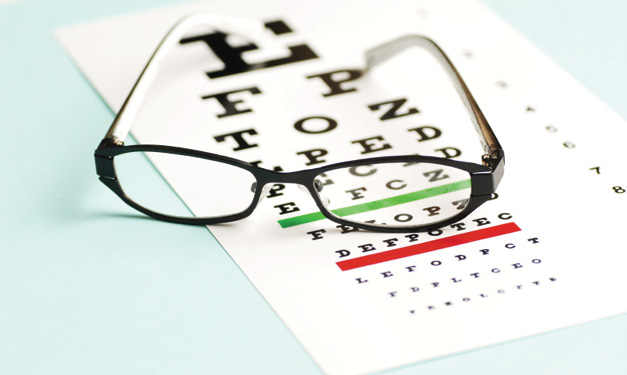 Buying clothes online is convenient. Sitting on the couch, browsing styles and clicking through the prompts is an easier process than taking a physical trip to the store.

But when the package arrives, it turns out the shirt you ordered doesn’t fit quite like you thought it would – and that material? Not what you expected.

It’s the same with eyeglasses, explains Shea Ferree Carney, O.D., of Marston Optometry in Livonia. “(It) depends a lot on trying on,” the Michigan Optometric Association member notes – and having glasses that fit well, are made with a quality lens material and have the proper prescription is imperative, especially for kids.

There’s a draw to purchasing glasses online. Usually, people will head to a web retailer because prices are lower than ordering glasses through their optometrist’s office. “I think a lot of where the online retailers came from was trying to show people that, ‘Oh, you can save money by coming online.’ But at what price?” Ferree Carney asks.

In a study published in Optometry: Journal of the American Optometric Association in 2011, researchers ordered 200 pairs of glasses from “10 of the most visited Internet vendors” retailers and received 154. Of those, 44.8 percent had an incorrect prescription.

“That’s a very significant percentage,” Ferree Carney says. “Especially for kids, if they’re getting ready to start school, they’ve come to us for a thorough eye exam and we’ve determined what their prescription should be.

“They need to see well and need to have something that works well for school especially so they can learn.”

A few other cautions

The study also found 25 percent of lenses for kids failed impact resistance testing. Glasses should have a polycarbonate lens, which she says is the most impact-resistant type. Although online retailers may say the lens is polycarbonate, it can be difficult to tell, she adds.

Even if you have an up-to-date prescription from your eye doctor – complete with pupillary distance measurement, or PD – there’s always a risk you can input the information incorrectly, Ferree Carney says. If a single-vision lens is “decentered,” or “not directly in front of their eyes,” she says, it can cause strain on the wearer’s eyes. Or, for kids who need bifocals or progressive lenses, optometrists have special tools for measuring to ensure the eye is able to see through the lens correctly, she explains.

In a press release, the American Optometric Association and MOA stress seeing an optometrist is the top recommendation when shopping for new spectacles. But for those on a budget or who want to try ordering on the Internet, here are a few recommendations:

Ferree Carney suggests parents should check reviews of the online retailer before they order. See how it worked out for other buyers. Were they satisfied?

Does the particular website offer warranties on eyeglasses? What’s the return policy? Do they accept insurance? All of these are worth checking before ordering, she notes.

Ferree Carney stresses that a big part of finding well-fitted glasses depends on being able to try them on. While some websites give you the option to upload a photo to see how a frame would look on your child, that can’t tell you how they’ll feel on their face, she says.

“I see a lot of kids, they’re little kids but they have big heads,” she adds, meaning sometimes, based on that and the distance between their eyes, they actually need adult lenses. “It’s really hard to kind of guess which one is going to fit the best,” Ferree Carney says.

Some retailers will send you frames before you buy just to try on. “Something like that would at least be beneficial to check the fit of the frame.”

Try asking your optometrist for his or her opinion on the lenses you ordered online. While the policy may vary depending on the office, Ferree Carney says if somebody were to bring the glasses in, she could consult them on if they were safe to wear.

For further recommendations, the AOA has a pamphlet of information and insights on ordering glasses online.