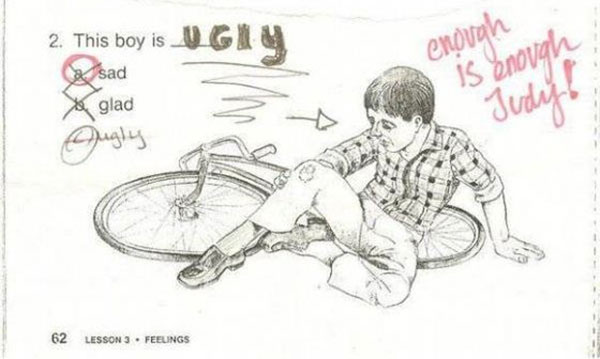 Education is about learning and growing and it can be difficult at times for students. But what about their teachers? They spend hours conducting class and grading papers – and for these instructors, it takes more than lecturing and giving grades to help their students. Some draw pictures to match up to their student’s artwork, while others question what their student was thinking with their submitted work. Among messages on the wall and messages on the paper, take a look at what teachers did to get their point across. 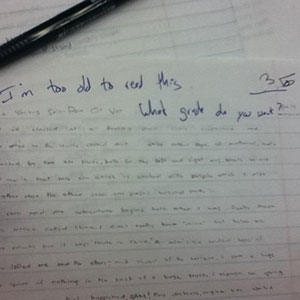 “Ain’t Nobody Got Time for That.”

The teacher conducting the class didn’t expect to receive this paper. “Back in high school, my friend got this back from her AP teacher,” Reddit user Merryano posts on the site. Unlike most teachers who would either tell the student to rewrite the paper or attempt to read it, the student’s teacher gave up and simply sent it back. Reddit user Flemtality says he remembers his father telling him to write small so the teach refuses to read it and give him credit. In return, he missed recess and rewrote an essay. “At some point after that I stopped taking his advice,” he says. 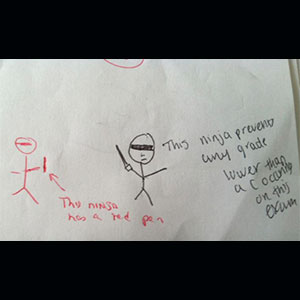 Attack of the Grading Ninja

When a student ninja strikes, it strikes hard. But it is no match for a teacher ninja with a grading pen. “This ninja prevents any grade lower than a C occurring on this exam,” the paper ninja says. I would like to see who won the battle. 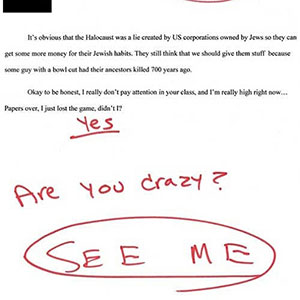 The truth will set you free. Not in the case of a student who did not pay attention in class and admitted it on a research paper. The teacher did not think the student’s honesty was amusing. Pictures are worth a thousand words. But this paper and picture is worth two paragraphs and a trip to the office. 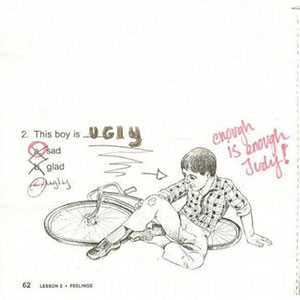 Judy and the Uninvited Guest

If you saw a young boy with a scraped knee sitting by his bike, would you think he was sad? He may have hurt himself and feels bad about his knee or bike. A student felt otherwise and wrote in bold letters that the boy in the illustration was ugly, which she added on the list of choices. “Judy really doesn’t like that boy,” a description says in the article 16 Hilarious Notes From Teachers Who’ve Had Just About Enough of Their Students. “Enough is enough, Judy!” the teacher writes. 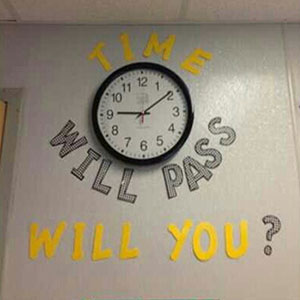 “Time will pass. Will you?” asks this teacher. The last thing a teacher wants to see is a student failing and having to repeat. Posted on Reddit by Erikm96, Hiiammaddie comments, “I had a teacher who had the same sign and I spent the entire year thinking this.” They are words that resonate with everyday life. 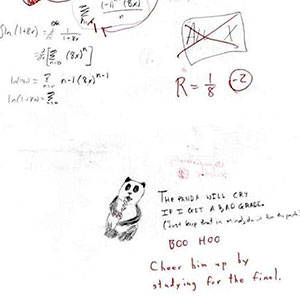 If Not for Me, Then for the Panda

Sympathy did not help this student with the exam. Adding a soft touch with a panda, the student hoped the animal crying over a bad score would produce a better grade. However, the teacher was not moved. Instead of feeling sorry for that student, the instructor gives good advice. “Cheer (the panda) up by studying for the final,” the teacher says. I’m in hopes a happy panda appears on the next test because the student decides to take the advice. 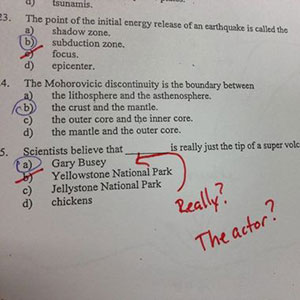 Actor Gary Busey starred in movies including Behaving Badly and Bounty Killer. He now competes on the 21st season of Dancing with the Stars. But I learned he is “the tip of a super volcano that is overdue to erupt.” However, Yellowstone National Park is the tip of the volcano. One teacher didn’t understand why the student chose Gary Busey from the multiple choices. You learn something new every day. 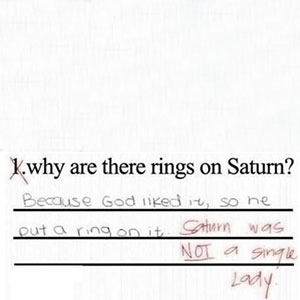 Will You Marry Me, Saturn?

Saturn and God are married. At lease that’s what a student said when asked why the planet had rings on it. But the celebration would be nothing without the famous Beyonce. The teacher and student both mention parts of her song “Single Ladies” in the responses. “Saturn was not a single lady,” the teacher writes. Well somebody needs to explain why Saturn has those rings. 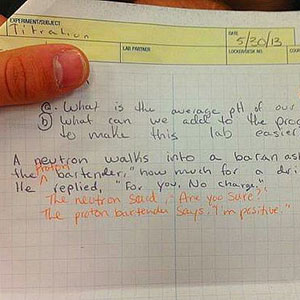 Learning about protons and neutrons was the epitome of science. Which one is positive? Which one does not have a charge? A student and teacher worked together to answer that question with a joke. In the end, neutrons buy a drink with NO CHARGE. And protons are POSITIVE that there is no charge. It’s safe to say that there is nothing wrong with adding fun to education. 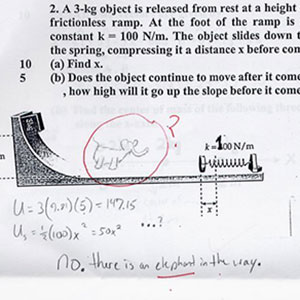 One student had the answers for everything, including if an object continues to move after it comes to rest. “No. There is an elephant in the way,” the student says. Clearly drawn by the student, the teacher did not give credit for the answer – but the elephant was a nice touch.