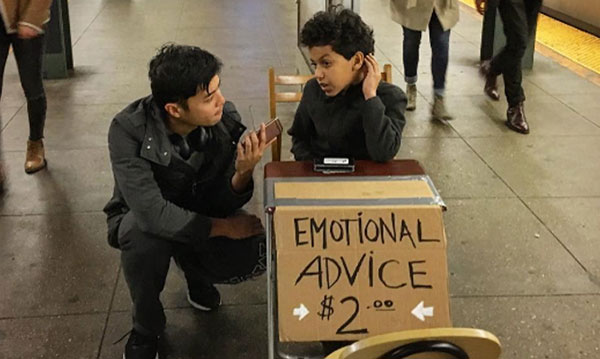 For just $2, grownups on their morning commute in Brooklyn, New York can find the answers they’ve been searching for in life thanks for an 11-year-old boy named Ciro Ortiz.

Why would an 11-year-old start such a service? The New York Post reports being bullied at school inspired him.

“It’s a good way to give back and make money,” he told the New York Post.

And apparently, his advice is going over well with the adults seeking his counsel. Ciro’s dad notes one woman said the child told her “what she’d been feeling in her gut that whole time.”

And the thing he says people come to him about the most? Change. He tells the Post his advice is this: “We have to accept (change). It’s going to happen — it’s always going to happen. Life is always changing.”

His mom told the Post this whole experience has actually been good for her son, too. “The first day he was out there (on the subway platform, giving counseling), he was very nervous and unsure of himself . . . A few Sundays later he’s come back saying, ‘I’ve met so many wonderful people. I’m gonna end up having so many friends.'”

And the beautiful thing? His dad says, “he’s not selfish with his money.” He has used it to buy snacks for kids at his school who can’t afford them, the news outlet reports.

This kid has clearly found a calling (though he hopes to one day be a video game developer, according to the Post). It’s a great reminder to slow down and maybe even see things from a more simple, kid-like perspective.