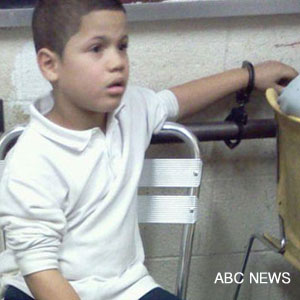 Outrageous! A 7-year-old boy handcuffed at the police station for hours on end. What third-world country did this happen in? Nope, no third world country – the good old USA.

Flash-forward one day: 7-year-old bully deserves what he gets – and look how his mama's dressed!

This is the age of instant information and real-time judge and jury. The average person is wired to a smartphone, computer or tablet, plugged-in to his or her favorite media outlets. Eager for the latest breaking news.

So when the story of a little boy handcuffed to a metal bar in a South Bronx police department broke Wednesday morning, people immediately – and angrily – began lambasting the school, the police, the city and anyone else they could think of. All this after the child was "falsely accused of stealing $5 from another student after school," the Associated Press reported in a New York Newsday article posted at 9:10 a.m. By afternoon, here at Metro Parent, one of our writers spotted a teaser for it on her Yahoo! News account. The image of the cuffed kid was striking.

Reaction was swift. A New York Daily News article, commenter Kanbr12 was appalled by the way the authorities handled this child: "No way should the police have treated a 7-year-old like that, unless he was out-of-control – which apparently he was not."

But after the 9-year-old victim, Seth Acevado, had his turn to speak, vitriol for 7-year-old Wilson Reyes – and his pajama-bottom clad mother, Frances Mendez – spewed forth in full force.

On the same Daily News article, Deuceman99 seethes, "The mother looks like trash. Kid deserves to rot in jail and have the (you)-know-what beat out of him."

The trial by rapid-fire reporting took off.

As of Friday, the story is still unfolding. Jack Yankowitz, Wilson's attorney, maintains the boy's innocence in the Daily News – and ABC News reports that robbery charges have been dropped.

All this made us at Oh Mother tap our mental brakes. Is it right to judge so publicly, when all the facts haven't been presented? Should media do a better job at fact finding, before rushing to web-scoop competitors?

And should we unplug – and spend a little more time with our kids, so it doesn't get to this point in the first place?