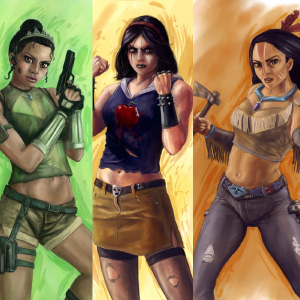 This iconic blond-haired, blue-eyed Disney beauty has been given a fierce new set of accessories: A leg band armed with daggers, swords hanging at her waist, and a death stare that would wither any pumpkin patch. At least that's how deviantART user joshwmc re-imagined her – and her eight other female friends.

At first glance, the warrior makeovers may be a bit of a shock to the innocent fairytale faces we grew up with (unless you were planning on adding a pistol to your child's Tiana costume this Halloween). Or maybe it's liberating "pro-girl power!" to see these damsels-in-distress turned dangerous – Aurora sports a heavy weight champion belt while Belle trades in her gold gown for a scowling high kick, and Jasmine wields a machete.

Accompanying these shiny new weapons, however, are shorter skirts – Rapunzel's bare legs take a sultry pose under a thigh-high slit dress – and tighter tops showing off toned midriffs and bigger chests. And even though we haven't seen Snow White's gothic look debut at Magic Kingdom yet, consider what this one artist's work is saying about Disney's message to young girls (and boys) everywhere. Are these "warrior woman" images an improvement to Disney's notoriously passive princess? Or are they a distortion of a heroine's true character by equating strength with violence and sex appeal?

Of course Disney has its tales that praise inquisitiveness (Alice wonders through her own adventures) and courage (Mulan fights for her father) as traits in their women. But why then do you suppose Aurora – cursed to sleep for a hundred years and rescued by a dragon-fighting prince – is "toughened up" in a skimpy, pink wrestling outfit while Mulan appears illustrated as the most clothed?

Amusing, eye-opening or dismissed as "silly" by viewers of the artwork, these portraits are filled with speculation on Disney's real message to its younger audiences – and what it means to be both strong and weak, good or evil. Young girls across the globe have memorized these films by heart, aspiring to be just like their beautiful, ball-gowned role models. But are they getting the right idea that life can be a struggle until someone comes to rescue you? Even boys are susceptible to believing that true masculinity means being buff, carrying weapons and killing things that get in the way. Furthermore, ever notice how Disney often associates its attractive characters with beauty and good, while evil dwells within ugliness?

There's no need to give away all your favorite Disney classics. But consider if we grew up to the stories a little differently. What if Walt had ended Cinderella with her fighting the evil stepmother in an epic showdown – with or without a knife throw – then riding off to the ball to pick up her average-Joe prince? Imagine that.

Want to teach your young child Spanish or English? Try these board books that they are sure to love.
Read more
At Home