Anne Frank ‘Evacuee’ Costume Has Parents Up in Arms

It seems particularly disturbing to dress up as a murdered child for Halloween but that didn't stop retailers from peddling an Anne Frank costume. 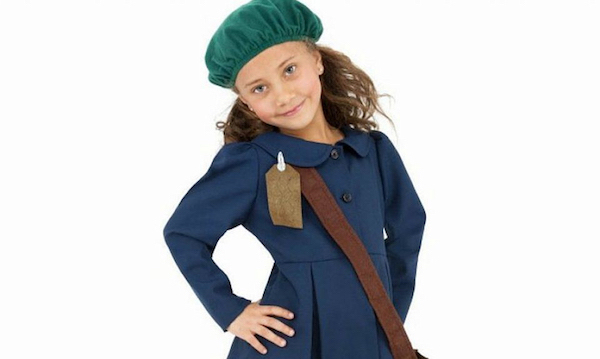 Halloween. It’s arguably the best time of the year – at least if you someone like me who digs dressing up and adores all things creepy. It’s the time of year when you get to access the darker recesses of your mind and unleash your creativity through decorations and costumes, and feel no shame for eating all the Reese’s cups.

For parents, though, it’s the time of year in which they have to brave the aisles of princess dresses and pirate hats to purchase the perfect costume for their kid to beg for candy in.

And every year in their conquest for the right version of Superman or Wonder Woman, parents seem to run across a ridiculous Halloween costume option or two that aren’t really made for kids – or in 2017, for anyone at all because this year’s questionable costume choice is the Anne Frank “Evacuee.”

You read that right. This year, HalloweenCostumes.com actually tried to sell an Anne Frank costume, complete with a green beret, brown shoulder bag and a blue dress with a “designation tag” sewn in.

The website released a statement saying that they sold costumes outside of Halloween and suggested that the costume could be used for a school play or project, but that didn’t stop other retailers from selling the costume and it certainly didn’t stop backlash from parents who called the product ignorant and brought it to the attention of the Anne Frank Center.

And that was probably the right thing to do, considering Anne Frank is one of six million people that were brutally murdered at the hateful hands of Adolf Hitler and the Nazi party.

It seems a bit tasteless, to say the least, to allow your child to parade around as a murdered child begging for candy – and that’s coming from someone who is a fan of those morbid Halloween garage door body displays.

What’s even more tasteless is a corporation that tries to make money off of the pain and suffering of fellow human beings.

But then again, both of these things happen all the time, every Halloween. After all, how many times have you seen a Native American costume at the store?

Even today, the website that sold the Anne Frank costume sells an entire line of Native American costumes, including ones with ceremonial headdresses, and no one bats an eye.

The Native American were forcibly removed from their homes, murdered and infected with disease at the hands of fellow humans, similarly to Jewish people during WWII – perhaps the intention behind such costumes is to celebrate the culture or honor the fallen but still, to do that you must also respect the wishes of the people that practice said culture.

Both of the holocaust and the genocides of Native Americans showed the worst possible side of human beings and neither one should ever be forgotten or ignored, but we need to do some revaluations on what is appropriate surrounding these pieces of history and what isn’t.

What do you think of the Anne Frank costume? Do you think it’s comparable to Native American costumes and would you let your child wear either? Let us know in the comments.