Are These Dad and Daughter Prom Photos Really Necessary? 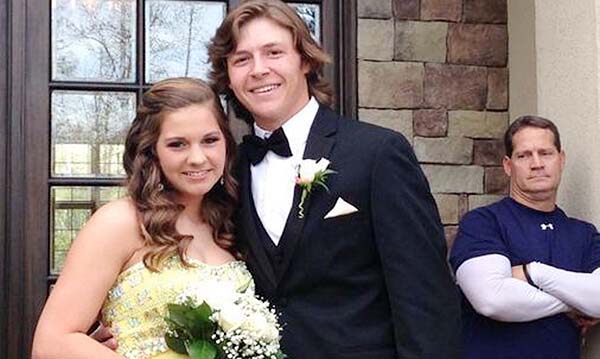 Prom season is upon us and soon you can expect your social media feeds to be filled with photos of juniors and seniors all dressed up for their big night out.

You can also expect to see photos being shared like these ones from The Stir where dads feel compelled to pose menacingly next to their daughter and her date – often with a shotgun in hand.

On Monday, The Stir posted this gallery of “12 Images That Capture How Dads Really Feel About Their Daughters Going to Prom.” Here you’ll find photos of happy young couples with dad in the background looking begrudgingly at his daughter’s date, dad with a baseball bat, dad loading a gun or dad fake-strangling a kid.

You can find similar galleries here on Pinterest and here on College Candy. Most are sort of funny at first glance, right?

We know these pictures are probably taken in jest and we’re glad families can make light of a tense dad-daughter scenario that probably plays out in TV sitcoms more often than in real life. Many modern parents give their daughters a little credit for choosing a suitable date, after all.

But “liking” and sharing these faux-threatening dad-daughter photos might only serve to further advance a sentiment that seems a bit dated. Are we really still stuck in a society where a young girl’s relationship is seemingly beholden to the whim of her father? Where the idea of shooting a 17-year-old boy is somehow a better option than teen sex or whatever else these parents are worried about? Joke or not, it’s an archaic image that our kids don’t need.

Dads are naturally protective of their daughters. So are moms. We don’t want anything bad to happen to our daughters or our sons on prom night. Prom night could lead to unprotected sex or an unplanned pregnancy – but usually it doesn’t, and we’re pretty sure none of these dads intend on shooting anyone if it does.

Are our daughters at risk for sexual assault on prom night? Sadly yes – on prom and every other day of the year. It’s really not a joking matter, and one of the best things parents of girls and boys can do is talk to their teens about it.

What else might really happen on prom night? Underage drinking. Drug use. Drinking and driving. Texting and driving. The list could go on. No photo ops with the threat of lethal force if you engage in those behaviors? Teens aren’t only at risk when they go to prom with a date.

Consider these facts: Teen traffic deaths during prom season weekend are higher than at any other time of the year, Huffington Post reported. And according to the National Highway Traffic Safety Administration, approximately 300 teens have died in alcohol-related car accidents during prom weekend for the past several years.

When prom night rolls around, parents do have a lot to be concerned about and their daughter’s date probably doesn’t top the list. So when it comes time for picture taking, why give our teen girls the impression their dads have a bigger stake in their relationships than they do? Why condition our teen boys to believe anyone else is involved in the consent scenario? Why not just smile and say cheese?

What do you think? Are these dad-daughter prom photos funny? Would you ever pose for one? Comment below with your thoughts!