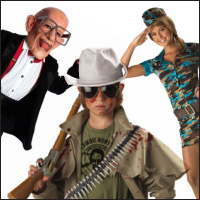 What really lies between the pit of man's fears and the summit of his knowledge? It is an area which I call – the Terrifying Store-Bought Kids Halloween Costume Zone.

(Rod Serling I'm not. But stick with me.)

This sixth dimension sucks southeast Michigan families into its vortex every October – make that late September. Like weeds, temporary shops such as Spirit Halloween and Halloween City pop up around the region, filling empty storefronts with their sassy, scary – and often pricey – prefab duds.

Hang onto your Morticia wigs and Nixon masks, kiddos. We're heading in.

Fortunately, there's a horde of brain-munching kids to keep Mr. Hunter preoccupied. Skate or Die Boy sports Mohawk spikes (because while hair may be dead, punk's not) – and a dandy red anarchy "A" carved into his skull. His buddy Skate Punk prefers to show a little more chest skin – and skull boxers. Feeling a bit woozy? Zombie Doctor is ready to see you now. Please try to disregard his rotting PVC chest cavity and knee. They're sore spots.

Let's move on. Around the next corner, we hear booming Nicki Minaj bass and wolf whistles. It can only mean one thing. We're approaching the realm of leggy tween girls.

Over there is the Bratz Cowgirl, in her short-crop petticoat and midriff baring shiny faux denim vest. Her marketing team tantalizes, "Jump on your horse and ride the latest kids' craze" – available in child's small, medium and large. Her friend, Major Trouble Tween, is drawing plenty of salutes in her camo mini dress. "Hey, soldier, where do I go to enlist?" the guys ask – according to another copywriter, who adds, "The boys will surrender and follow whatever orders you issue. Be gentle – they're only boys and you shouldn't pull rank!" That's just-right by Goldilocks Tween, undoubtedly up past her bedtime, chumming it up with Child Hannah Montana, who's maybe in first grade and rocking fishnets. Even a lipstick-wearing 6-year-old Dora the Explorer is letting little belly peek out.

Without warning, a blond brigade of Sharpays – one in a gold lame "Opening Outfit," another all pink "Prom," and the third ready for the "Lava Springs Country Club Star Dazzle Show" – passes by, flashing Stepfordian grins. Yet they're not as unsettling as the little Pilgrim Girl, whose creepy smirk seems to say, "Never fear. Tomorrow, all will be turkey and football."

There are eerier sights still. Next, we enter a Wonka-esque scene of weird masks and unearthly appendages. Just try peeling your peepers off of Tropical Chimp Boy and Rango, who are debating the price of candy corn behind polyester and PVC faces – in coordinating Hawaiian flower shirts. A pumped up Child Muscle Shirt boy is busting some moves with none other than Six Flags Mr. Six, who's of course dressed to the nines. The party apparently wouldn't be complete with a little potty humor. C'mon, 'fess up: Who invited Toilet Child?

Finally, straight ahead, there's a blinding bevy of camera flashes – and fusses. What have the moms of this zany zone opted to dress their babies as?

One tipsy toddler clomps around in pink velour bellbottoms and a big plastic horse head hat – My Little Pony, they call her. Not far away, Li'l Elephant has a trunk sprouting out of his neck, plus big floppy ears that we wager he'll be yanking off his wee noggin in no time. And the commercialized consumables – it's almost like a bizarre baby grocery store in here. Heinz Ketchup Packet Infant looks ready to make a mess on every burger he sees, while M&M baby and Sugar Babies are both odes to mom and dad's chocolate faves.

Well done, my friend – you've survived. As you exit the Terrifying Store-Bought Kids Halloween Costume Zone, take a black balloon from Last Laugh Evil Clown Child – who cackles at us manically. He knows we'll be back next year!