Baby Floats Out to Sea as Parents Sunbathe 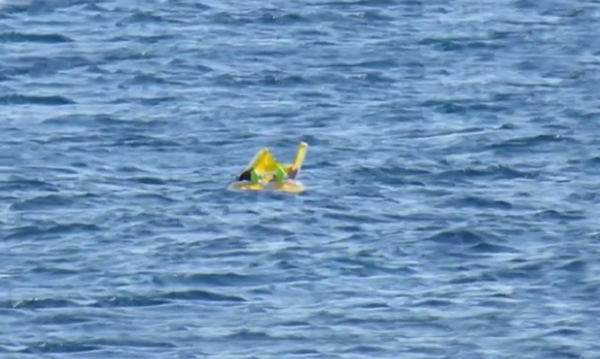 Parenting doesn’t come with a how-to manual but it seems like some things should be obvious. For example, putting your infant in the ocean alone seems like a big no-no, but apparently it’s not so obvious to some folks, considering the Turkish Coast Guard had to rescue a young Melda Ilgin from the ocean after she drifted a half-mile out on a pool float.

So, how did she get there? Let’s rewind.

She and her family were on vacation and enjoying the beautiful beaches on the southwest coast of Turkey. Her parents put her in a yellow inflatable in the water and retreated to the beach to sunbathe nearby. They fell asleep on the beach and a combination of strong wind and ocean current pulled the 10-month-old out to sea.

Several beachgoers tried to rescue her but couldn’t because she was too far out. In the end, she was saved and reunited with her parents. She was given a drink of water and the family left the beach, according to WSOCTV.com.

It seems insane that any person would think it’s a good idea to leave their child in any body of water unattended. In fact, it’s recommended that parents stay within an arm’s length away from kids while in the water.

These parents got lucky. Not only did they dodge a child neglect charge but they got to go home with their child, too. Not every parent gets to do that after an incident after the beach.

We truly try not to judge a parent’s decisions when it comes to their kids, but a serious lack in judgment that could have cost a child her life is something that must be discussed.

Hopefully her parents understand that this was a bad decision and that they learn from it. Hopefully they know that a million things could have gone wrong and they move forward with a greater understanding of water safety and take it a bit more seriously in the future.

What would you tell Melda’s parents if you had the chance? And do you have any water safety tips of your own? We want to know – tell us in the comments below.