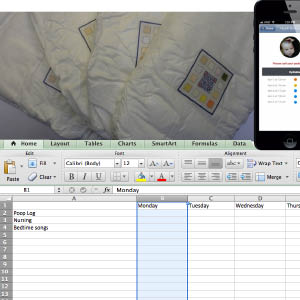 So-called "helicopter parents" hover over their child, constantly keeping tabs. They assist in everything their kids do, the stereotype goes, from schoolwork to sleeping habits. And – perhaps not surprisingly, in this Facebook era of hyper-documentation – there's evidence it's happening much earlier. Like, in infancy. Even in utero.

Today's Oh Mother offers more proof we've fully entered the age of over-reacting and over-sharing – with a good deal of smothering. Will these kids turn out to be perfectly well developed and socialized, or will all this fuss over data cause dependency issues in the future? Read on and weigh in.

Mom Amy Webb, who gave birth at the age of 35, was worried about increased risk of defects, because of what modern medicine calls her "advanced maternal age." So she and her husband decided to track everything their baby did.

The couple started taking detailed notes during gestation – and simply never quit, going as far as itemizing poopy diapers (including a color chart with corresponding numbers ranging from "1: Dijon mustard" to "10: tar"). It helped these parents gain a sense of calm and control, Webb writes – and, she claims, it makes them better parents all the way around.

Now, Webb happens to be a tech/data expert (she also put her analytical chops to work to land her husband – seriously). Still, her article on Slate.com has raised eyebrows. Especially the part where mom recalls how she and dad grilled their pediatrician to rate their 18-month-old daughter's progress compared to other children of the same age – with a letter grade. Webb says at one point during the check-up, her husband asked, "Is she a C+ or a B?" (In case you're wondering, the tyke passed with an A, while her obsessive parents slid by on a C and were told by the doc they "need to relax. Leave the spreadsheets at home next time.")

The fact that their child is developing swimmingly (Webb gives a recent example of her well-adjusted little girl in a dance class) seems to justify the compulsive spreadsheeting. By charting everything, Webb maintains, they can better cater to her needs – not necessarily based on their own feelings but on hard facts, statistics and specific data. In other words, it forces them to be conscientious and give their girl absolute attention.

Slate reader EdieB had some strong feelings about the negative effects this type of parenting could have on the daughter in the future.

"This is, without a doubt, the most disturbing article I have read on the Internet," she commented. "Alongside your child's college fund, please, start a psychological/psychiatric fund. Tracking every aspect of your child's existence is extremely creepy and wholly unhealthy."

Meanwhile, commenter Robyn agrees with the use of spreadsheets for tracking many things in life, but said the outcome of this is yet to be seen.

"I think the author rightly identifies this tendency (of compiling information) in herself as an anxiety management tool, then wrongly conflates it with good parental care. It *might* have a net positive impact on her parenting; who knows?"

Keeping with the theme of obsessive monitoring, we present to you the Pixie Scientific Smart Diaper. This invention keeps track of the mess in a baby's diaper and lets parents know if their kid has a urinary tract infection, prolonged dehydration or is developing kidney problems.

An article in New York Times' Bits blog has sparked a debate about whether this information is a bit too invasive, and may contribute to the "wussification" of America.

Alex, a commenter on the Bits article, pokes fun at the idea, saying, "Oh great … just what today's helicopter parents need … more ways to be fearful/hypochondriacs about their precious little snowflakes."

How do the digital diapers work? No, microchips do not need to be implanted before use. Each diaper has a small square on the front with a barcode and colored squares inside. By snapping a photo of the soiled diaper with a smartphone app, you can find information about your child's health – and, the makers maintain, discover whether or not you need to get in contact with a doc.

That creator, incidentally, is a New York dad named Yaroslav Faybishenko, who tells Bits that his own tyke was responsible for his eureka moment.

"I was driving with my wife and daughter one day, when my wife asked if the baby had wet herself," he told the blog. "I realized she was sitting in data."

Some agree there's value in this goldmine of untapped information. RAP, another NYT commenter, believes these diapers are a step in the right direction. "This technology will prevent needless pain and treatment for those who cannot communicate their pain and discomfort."

The Pixie Scientific site notes, "Our goal is not to create another quantified self gadget, but to create a product that is unobtrusive in your daily life and only speaks up when there is reason to see a pediatrician or a specialist."

Grab your blankets and basket of goodies for an outdoor meal and tons of fun at one of these top picnic spots in Macomb County.
Read more
Attractions