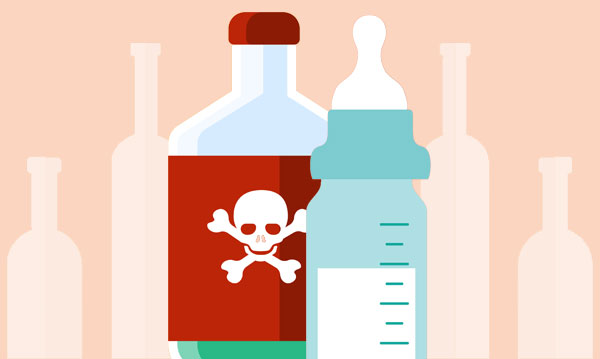 A truly horrific story coming out of Kenosha, Wisconsin: A 1-month-old baby hospitalized with a 0.29 percent blood alcohol level because of an accidental vodka and water mix up, USA Today reports. Yikes!

Before we jump on this parent for what police are calling an accident, as WISN News reports, let’s rehash the details.

According to the mom, 20, there had been a water bottle in the kitchen with water in it, but the baby’s father emptied it and filled it with vodka with the intention of taking the alcohol to a friend’s house, Brad Hetlet, a spokesman for the Kenosha Police Department, told USA Today.

But after mixing what she thought was about two ounces of water with the baby formula, and feeding the baby, she noticed her daughter’s red toes, and partially closed eyes. The baby wasn’t responding to her name.

Following the incident, the 1-month-old’s father allegedly choked the woman, as she told police, WISN reports. It got way out of hand, and that’s when law enforcement was called. Officers noticed the baby’s labored breathing and called an ambulance, which transported her to Children’s Hospital of Wisconsin, according to WISN.

At last check, the baby was expected to be released from the hospital, and the boyfriend and girlfriend are not likely to face child neglect charges. However, the boyfriend faces a whole list of charges: strangulation and battery, disorderly conduct and resisting an officer, WISN says.

Susan Pierson, commenter on the WISN post notes, “I’m guessing she used the ‘water’ to mix the formula. Not sure how she didn’t smell the alcohol when she started pouring it,” which is a fair point, but as other commenters added, sometimes higher priced vodka doesn’t smell as strongly or even have a taste, and the smell of the formula or kitchen could have masked the smell. In ways, it could easily pass for water.

On the USA Today article, Karen Borgan comments, “‘Mistakenly.’ Unfit mother and father. You don’t make mistakes like that with an innocent person depending on you.”

This is a truly unfortunately situation, and I can’t imagine the horror of discovering as a parent you made a mistake so serious. And it is understandable there are readers who find this enraging. How scary! However, things could have been much worse for the baby and for the mom. And while it’s absolutely terrible, I can’t point fingers. If it truly was an accident, who are we to judge? As severe as it was, it’s not impossible to think a blunder like this couldn’t happen to just about any mom – especially since in this case, it’s reported the bottle had really previously been filled with water. As WISN notes, the police aren’t going to charge the parents for this mistake, either.

It sounds like the baby will be OK, and for that, we’re grateful.

How about you? Do you think this was a case of bad parenting or was it a dreadful mistake? Weigh in!