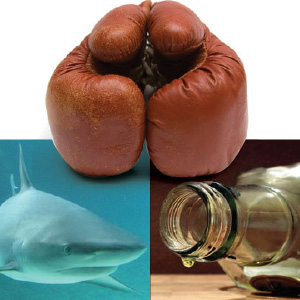 Most of the time, parents try to make good decisions for their children, hoping that one day the kids can make smart choices for themselves. But sometimes, mommy and daddy don't always know what's best. Here are a few recent tales of parents who let their children participate in risky – and some flat-out dangerous – behaviors.

A 29-year-old father in northern Indiana thought it would be fun to take the kids for a drive – with them strapped to the hood of the car, after he had been drinking.

According to the Huffington Post, the man was arrested in May after a witness called 911. The father told officers he tied the four children (ages 4 to 7) to the hood of his car with a tow strap because he thought they would enjoy the ride.

He pleaded guilty to not only child neglect, but also drunk driving charges – and faces six months to three years in prison on each of the four felony counts.

Many were shocked and outraged when a Missouri mother posted a video clip of two small children to her Facebook page.

In the video, two little girls – one of which is still in diapers – are fighting as the mother is cheering them on in the background. She can be heard shouting, "Get some action!" and "Y'all better ball up some fists!"

An acquaintance of the mother alerted others to the video when she saw it. When Fox News asked the Missouri Department of Social Services about the video, they said they couldn't comment on specific cases.

Not exactly a Sea World adventure

During a recent family vacation to the Bahamas, one Connecticut couple let their 5-year-old daughter swim with sharks during an outing with local water sports operators Power Boat Adventures.

According to Caribbean 360, the parents took video of their little girl snorkeling in shallow water with several different shark species.

The trip included watching Power Boat Adventures employees feeding dead fish to the sharks, which can be seen in the footage.

When the video was posted on YouTube, viewers did not take this incident lightly, calling in to question the safety of the adults' parenting choices for their young daughter.