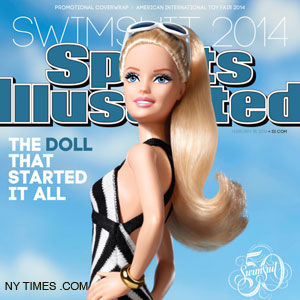 From Cheryl Tiegs to Elle Macpherson to Tyra Banks, some of the most famous models on the planet have graced the cover of Sports Illustrated's annual swimsuit issue. This year, the magazine teams up with Mattel to feature Barbie as its cover model for magazine's #unapologetic campaign.

Dressed in an updated version of her black-and-white striped '50s swimsuit, Barbie gets her turn on the cover of magazine's 50th anniversary issue, which was shot by photographer Walter Iooss Jr. and is set to hit the stands on Tuesday, Feb. 18. Inside the magazine, according to the The New York Times, is a four-page advertising feature.

Just like her predecessors, Barbie is legend in her own right, having had about 150 jobs, the Times notes. By putting her on the cover, Mattel is trying to leave the "babes in bathing suits" persona behind and focus on the positive things Barbie has done – much like the models-turned-entrepreneurs the magazine tends to feature.

However, both the magazine and the doll have often caused controversy on their own, so the collaboration has caused quite a frenzy. And, of course, the "unapologetic" campaign adds to the drama. So – what is that exactly?

Well, first of all, the campaign isn't the actual final cover. The New York Daily News gives you a glimpse of SI's real anniversary issue, which Jimmy Kimmel revealed on his late-night show early this Valentine's Day morning.

And secondly, it turns out the SI and Mattel campaign was designed as a way to poke fun at each company's haters.

According to Slate, "As a legend herself, and under constant criticism about her body and how she looks, posing in" the issue "gives Barbie and her fellow legends an opportunity to own who they are, celebrate what they have done and be #unapologetic," Mattel said in a statement on Tuesday.

Needless to say, critics don't see it that way. Barbie has frequently been criticized for giving young girls an unhealthy perception of beauty – and Sports Illustrated, according to The New York Times, has been called out for objectifying women.

On Mommyish.com, the choice to feature Barbie on the faux SI cover is being criticized for sexualizing a toy – a plastic doll that your daughter (or son) wants to play with. Barbie is for kids and SI is for adults – so the combination of the two has come into question.

Commenters on Mommyish.com – like Megan Zander – agree. "The body issue ramifications for girls aside, it's the sexualization here that makes my skin crawl. Flip the script for a second – what if they wanted to put GI Joe in Playgirl? Universally creepy, right!?"

However, others feel that people are overreacting. Kelly, another commenter, says, "That's cool. I'm #unapologetic about disagreeing with you. I think it's OK for different people to have different opinions."

And for anyone wondering: The cover "honors" ultimately went to three sexy topless models baring their behinds in skimpy bikini bottoms.