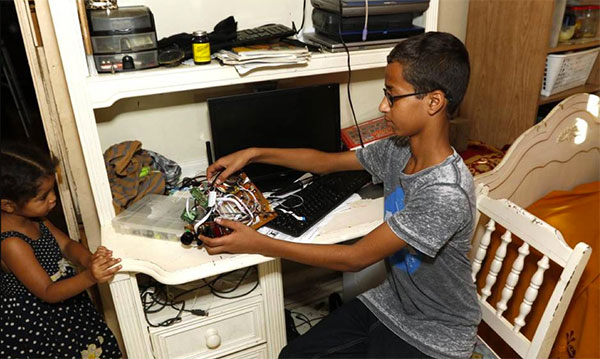 In a picture that’s being shared countless times on social media, the look on young Ahmed Mohamed’s face says it all.

The 14-year-old is standing in his school, hands behind his back in handcuffs and wearing a NASA T-shirt along with a facial expression that looks equal parts confused and hurt.

He had just been arrested for bringing an invention to his Irving, Texas school that he thought might impress his teachers. Instead, it led to his arrest in what many are calling a clear case of racial profiling of the Muslim boy.

Though the robotics student insisted the device was simply a hand-built clock, teachers thought it looked like a bomb and ultimately decided to contact police, the Dallas Morning News reports. Ahmed was taken to a juvenile detention center and suspended for three days and police initially called it a “hoax bomb” incident.

On Wednesday, the Irving police chief announced that no charges would be filed against the student.

“We have no evidence to support that there was an intention to create alarm or cause people to be concerned,” Irving Police Chief Larry Boyd said during a press conference, the Washington Post reports.

Boyd says the police response “would have been the same” if the boy wasn’t Muslim and that the department was trying to “err on the side of caution.”

A letter from the Irving school’s principal explaining the situation to parents makes no mention of the district’s mistake and encourages students to immediately report any suspicious items or behavior, as Vox reports.

“Please rest assured that we will always take necessary steps to keep our school as safe as possible,” the letter states.

But as details are released by Ahmed and his family about what happened – including some reports that officers “repeatedly brought up his last name” and that they refused to let him contact his parents – people across the country are calling for answers and using #IStandWithAhmed on social media.

The outpouring of support for the student includes tweets from President Barack Obama and Hillary Clinton.

“Cool clock, Ahmed. Want to bring it to the White House? We should inspire more kids like you to like science. It’s what makes America great,” Obama tweeted.

Clinton’s message read, “Assumptions and fear don’t keep us safe – they hold us back. Ahmed, stay curious and keep building.”

And even Mark Zuckerberg chimed in, inviting Ahmed to visit the Facebook offices.

“Having the skill and ambition to build something cool should lead to applause, not arrest. The future belongs to people like Ahmed,” Zuckerberg wrote on his Facebook page, Business Insider reports. “Ahmed, if you ever want to come by Facebook, I’d love to meet you. Keep building.”

What do you think of the situation? Tell us in the comments section below.