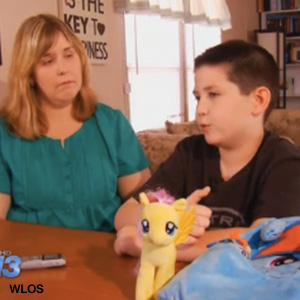 Grayson Bruce faced punches, pushes and name calling when he went to school. Why? Because the 9-year-old boy brought his lunch bag to school.

To be exact, he brought a My Little Pony lunch bag to school, donning Rainbow Dash, one of the characters from his favorite cartoon show. But instead of swooping in and stopping students from bullying the Buncombe County, N.C. boy, the school banned him from bringing his lunch bag to school.

Grayson picked out the Rainbow Dash bag this year, according to WLOS News 13. His favorite cartoon promotes friendship, and as mom Noreen Bruce told the news station, doesn't use curse words or involve violence. "It's hard to find that, even in cartoons now," she says.

Yes, Grayson says many of the characters on the show are girls, and most of the toys are "girly," but he told WLOS News 13 the bullies are "taking it a little too far, with punching me, pushing me down, calling me horrible names, stuff that really shouldn't happen."

Mom isn't happy about the school's choice. She says the school asked him not to bring the bag to school "because it had become a distraction and was a 'trigger for bullying,'" WLOS News 13 reports.

"Saying a lunchbox is a trigger for bullying is like saying a short skirt is a trigger for rape," mom told the reporter of banning the bag in an attempt to stop the bullying. "It's flawed logic, it doesn't make any sense."

Buncombe County Schools' initial response, given by the assistant communications director Jason Rhodes, as reported on March 12 by WLOS News 13, says, "An initial step was taken to immediately address a situation that had created a disruption in the classroom. Buncombe County Schools takes bullying very seriously, and we will continue to take steps to resolve this issue."

On March 19, they followed up with a statement to the same station saying, "We look forward to meeting the family tomorrow (Thursday) to further discuss and resolve this issue. We take any allegations of bullying very seriously, and we will continue to work in all situations to protect our students."

Apparently, Grayson is now carrying a different bag to school, but how fair is that?

"To punish the victim just shows how, not just flawed, but how warped justice is these days. To give such an example to children is to bring them up with this kind of justice; that the victim is at fault. And that is plainly wrong," they write.

Another Parentdish commenter, george134, poses the question, "So basically the school message is 'if you see someone isn't the same as you then it's OK to abuse them until they conform'?"

Over on The Stir, commenter Kristi speaks to another view. "Honestly I wouldn't have let my son take a pony lunch box in the first place. It doesn't take a brain surgeon to foresee the reactions of kids of that age. I am here to protect my kids from the fallout of a bad decision. There are more ways to encourage creativity and choices for a 9-year-old," she explains.

Poor Grayson. Innocently carrying a bag that represents a cartoon that has a good message – about friendship. It's unfortunate the way the school handled the situation initially resulted in Grayson having to give up carrying his bag. But, props to Grayson for being so mature about the whole situation, as he is in the interview with WLOS News 13. Hopefully, after the planned talks with the school, this story has a happier ending – and a more helpful solution to thwart the real problem: the bullying.