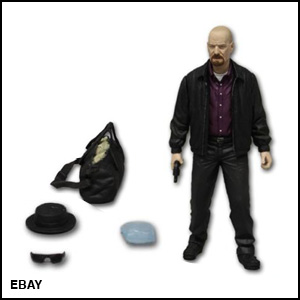 Admittedly, I was a fan of the AMC TV show Breaking Bad. It was action-packed, had a riveting and unique story line – plus the acting was incredible.

Even still, at times it was difficult to watch. There were plenty of violent scenes I didn't even keep my eyes open to watch because they were too gruesome or disturbing. Not to mention, there are tons of drugs. Tons. After all, the entire five-season show revolves around chemistry teacher Walter White, who teams up with his former druggie student Jesse Pinkman, to make and sell a signature blue methamphetamine.

Not exactly a kid-friendly show, to say the least. So why were Breaking Bad action figures of the meth-wielding duo being sold at Toys R Us and at ToysRUs.com? It's the same thing Florida mom Susan Schrivjer wanted to know. Schrivjer, outraged at seeing the action figures on the toy store chain's shelves and website, took to Change.org to start a petition.

"While the show may be compelling viewing for adults, its violent content and celebration of the drug trade make this collection unsuitable to be sold alongside Barbie dolls and Disney characters," Schrivjer wrote in the opening of her petition, calling for Toys R Us to rethink their decision and stop selling the figures.

Talking to NBC, she said she was "very shocked and appalled" when she saw the figurines. The Walter White figurine even came with a duffle bag of cash and a bag of fake crystal meth, according to NBC.

She turned to other citizens in her petition for help, saying, "Parents and grandparents around the world shop at Toys R Us, online and in stories, with their children and should not be forced to explain why a certain toy comes with a bag of highly dangerous and illegal drugs or why someone who sells those drugs deserves to be made into an action figure."

Fair point – and 9,300 others thought so, too. One signer Jamie Ziegler commented on the petition, "I thought Toys R Us was 'where a kid can be a kid.' This is totally inappropriate for a kid's toy store."

Toys R Us defended their decision when the controversy started, as NBC reports. The toy store made a statement to NBC saying, "the product packaging clearly notes that the items are intended for ages 15 and up." They also noted the dolls were "located in the adult action figure area of our stores."

Does that matter, though? Petition signer Sally Briedwell didn't think so. "Even marketing to 15 & up you are still promoting the drug trade. Children between the ages of 15 & 21 have a hard enough time with all the other advertising and peer pressure. Please don't add to that."

It's worth noting that on Tuesday evening, the Associated Press reported Toys R Us officially pulled the four Breaking Bad figurines.

"Let's just say," Toys R Us said in a statement, "the action figures have taken an indefinite sabbatical."

What do you think of this situation? Would you have been outraged if you saw the figurines at the toy store?