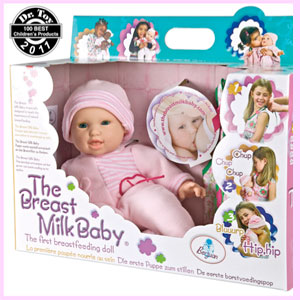 As a kid, my favorite toys were my baby dolls. Just plain ol' dolls that didn't make sounds or wet their diapers.

Since my childhood, though, baby dolls have become increasingly "real." And the most realistic doll I've seen yet is Breast Milk Baby, a doll from international toy company Berjuan.

On Nov. 9, Breast Milk Baby was released in the United States, according to the Daily Mail – a year after the company announced its plans to make the doll available to U.S. retailers.

"The world's first breastfeeding baby" makes sucking noises when held up to a bib the child wears on her front. The flowers on the bib, which stand-in as nipples, have sensors inside them that make the doll feed. When the doll is done feeding, it cries until it's burped.

The doll, which is $89, comes in a variety of ethnicities, outfits and names.

Berjuan, based in Spain, has been promoting the toy as a way to learn about breastfeeding. On its website for the doll, it reasons, "Little girls need to learn to breastfeed."

"The Breast Milk Baby lets young girls express their love and affection in the most natural way possible, just like mommy!" the company says on the site, in a section called "Why Little Girls Need to Learn to Breastfeed." Berjuan concludes, "The Breast Milk Baby will revolutionize our nation's attitudes to good infant health, while letting little girls share in the wonder and magic of motherhood. Shouldn't they be ready for a healthy future?"

Since the doll hit the U.S. market this fall, it's popped up in headlines touting mixed reviews.

"We've had a lot of support from lots of breastfeeding organizations, lots of mothers, lots of educators," Dennis Lewis, U.S. representative for Berjuan, told the Associated Press. "There also has been a lot of blowback from people who maybe haven't thought to think about really why the doll is there and what its purpose is. Usually they are people that either have problems with breastfeeding in general, or they see it as something sexual."

Breastfeeding is the natural way to feed a baby. But critics of the toy have argued that encouraging children at such a young age isn't necessary.

Bill O'Reilly, syndicated political columnist from the show The O'Reilly Factor on Fox News spoke out about the dolls when he first heard of them last year, saying, "I just want the kids to be kids. This kind of stuff – we don't need this," according to The Inquisitr.

A mom in the United Kingdom told the Mirror recently that she thinks the doll "is another disgusting example of forcing adulthood on our children long before they're ready."

On the other hand, Rebecca Schiller with The Guardian in the UK wrote an article defending the doll.

"The Breast Milk Baby may have a high price tag and an overdone concept," she writes, "but in a world where people often hide behind Page 3 to avoid seeing public breastfeeding, anything that seeks to redresses the balance at an early age is to be welcomed, not scorned."

She's not the only one who approves of the toy. Last year, the doll made the Dr. Toy Top 100 Best Children's Products of 2011 list – and was given the "Dr. Toy Top 10 Socially Responsible Products" honor, the doll's website says.

But father-of-five Lincoln Hoppe from Los Angeles told the AP that kids who want to be like their breastfeeding mom might like the doll – but, he concluded, "They're going to imitate mom anyway using whatever doll they've already got."