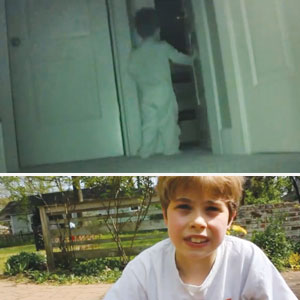 A better title for this blog installment might be “Oh, Brother.” Today, we focus on two brands of darn-smart rug rats who’ve been racking up the YouTube views. Let’s just say, if these little dudes were your siblings, you might wind up wanting to punch ’em. But for very different reasons: one for being a sneaky little sticky-fingers, and the other for his sage-beyond-his-years spiels.

Let’s start with the 2-year-old Utah tyke who’s earned the nickname “Bedtime Bandit.” Under cover of night, the tot – his name is Kyle Moser, according to ABC News – snuck into his older sister’s bedroom and swiped her unicorn pet pillow – after stealthily picking the lock. With a nail file. Seriously! He was caught red-handed. See for yourself:

The boy’s mom, Joann Moser, told Huffington Post she was “VERY skeptical” about the perp, but even so, set up a night-cam in the hallway after her 8-year-old daughter accused the sly sibling of nabbing her toys – despite locking her bedroom door.

At least mom saw the funny side of what was caught on camera. “We could not stop laughing afterward,” she told HuffPo, “and we let him sleep with the pillow pet that night.”

While Kyle may have a promising career as a locksmith (or a fallback as a crafty criminal), a boy with seven years on him might want to look into a philosophy degree someday.

In fact, that’s become the boy’s web moniker – “The Philosopher” – and it’s easy to see why. See what he told Zia Hassan, a Washington D.C. “musician, blogger, teacher-in-training and video cameraman,” according to NPR, about the universe and the meaning of life.

How many tweens do you know that wax on life on other planets, multiple universes and whether events are “predestined” in such eloquent, perceptive prose? Oh, and the meaning of life, in case you’re wondering? “It’s an endless quest without knowing what your quest is,” says the boy, identified only as a suburban Washington child.

And his younger sibs don’t show any hints of envy or irritation. Quite the opposite, actually. His 7-year-old bro makes a cameo, too – mulling over how special and necessary baseball, art and music are. And their blond kid sister shows off her musical time-keeping chops, strumming the strings on Hassan’s guitar as he holds down the chords for “Mary had a Little Lamb.”

And while both these young guys are enjoying a millisecond of Internet limelight, maybe there are a few lasting lessons in their footage for any family. Like, it’s OK to celebrate your kid’s talents – even when they may cause trouble. And, as the “Socrates” boy puts it, anything is possible.

“The odds may be against you,” he says contemplatively, squatting on his backyard patio, “but there is never a definite ‘no,’ that ‘you cannot do this.'”