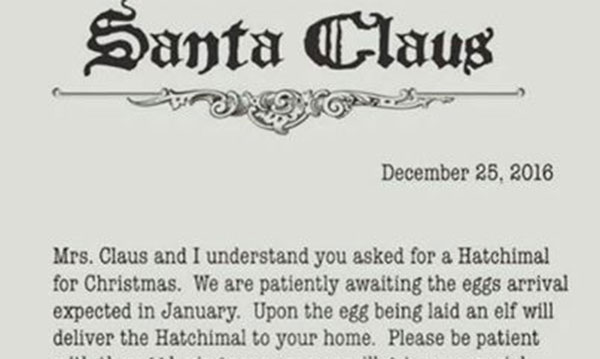 It doesn’t quite sound like part of Santa’s job description but some kids will be under that impression soon. That’s because their parents have taken to conjuring up apology letters from St. Nick himself out of desperation since they can’t find this year’s hottest holiday toy: the Hatchimal.

According to Scary Mommy, the note-writing is a growing trend in light of the toy shortage and subsequent price-gouging.

Basically, some parents are just so sure they won’t find the highly-coveted hatching egg toy in time for Christmas (and let’s face it, they’re probably right), they’re sending out sorry notes from Santa Claus preemptively.

As described in the Scary Mommy post, the letters either promise the Hatchimal at a later date or ask the child to remove it from their list altogether. One of the highlighted notes – which is very official-looking, with its fancy fonts and Santa Claus letterhead – reads as follows:

“Mrs. Claus and I understand you asked for a Hatchimal for Christmas. We are patiently awaiting the eggs arrival expected in January. Upon the egg being laid an elf will deliver the Hatchimal to your home. Please be patient with the egg laying process, you will get your special Hatchimal egg as soon as it’s been laid!”

It’s a noble effort to try to prevent kids from feeling a big letdown on Christmas morning, but the idea is also raising some eyebrows. Because really, who ever said Santa guarantees kids will get everything they ask for? And when did he start communicating with children in advance about what they will or won’t get?

“Since when does the man in red apologize for anything?” writes Megan Zander, the author of the Scary Mommy post. “He’s supposed to watch over you to make sure you don’t step out of line and steal your cookies as a reminder of his power, not grovel at your feet for forgiveness over a single gift.”

And we can see her point. The letters are a little over the top. As Zander suggests, why not just tell our kids that Santa’s magic has limits?

Then again, we parents are the ones who push this Christmas magic storyline to begin with – complete with half-eaten cookies, mischievous elves and now even elf pets – so it’s not so difficult to understand why some moms and dads feel compelled to follow through. Santa can get to every child’s house in the whole world in one night but he can’t get you a Hatchimal? But he did get one for five other kids on your block? It defies logic.

Other things are easier to explain. Santa didn’t get you a real life pony? Well, that’s because Santa knows your parents aren’t OK with that. But if your kid truly wanted a Hatchimal and nothing else and Santa doesn’t deliver, how do you explain that without diminishing some of the magic on Christmas morning?

An apology letter probably isn’t such a bad idea. Why not let Santa break the news so you don’t have to? It’s just one more well-intended fib in a big web of lies we spin for our kids every holiday season.

If you aren’t cool with it, though, you could always try another tactic. Tell your kid about the negative reviews of Hatchimals and try to get them hooked on something more attainable (toy review videos should come in handy for this).

What’s your take? Would you give your kids an apology letter from Santa if you couldn’t get the gift they wanted? Tell us in the comments.

Looking for some family fun? Check out our list of events and other things to do this weekend.
Read more
Tweens & Teens