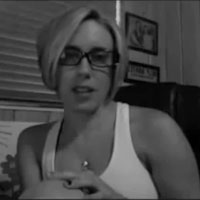 For all the screen time she got in court, we never heard Casey Anthony say a word. What a difference a video diary – or possibly two? – can make.

Or do they? To quote the 25-year-old Florida mom acquitted of murdering her daughter, Caylee, "It's just a little surreal how much things have changed since July – and how many things haven't changed."

The grainy black-and-white footage of the first video – shot back in October and featuring Anthony, as confirmed by her attorney – runs just 4 minutes and 20 seconds. In a visual switcheroo, Anthony's chopped her hair, dyed it blond and sports thick glasses and a tight-fitting white tank top. She makes no direct mention of her deceased child or controversial case, which Time dubbed the social-media trial of the century ("Casey Anthony found not guilty" ranked as Facebook's third-highest global topic in 2011.

"I'm extremely excited that I'll be able to Skype, obviously keep a video log, take some pictures and that I have something I can finally call – mine."

Comments like that have the web a-Twitter all over again since the video popped up Jan. 5. And no wonder. It's Anthony's first public appearance since her July not-guilty verdict. In it, she riffs on her dog ("who I've adopted, and I love") and self-consciousness on camera ("I don't know whether to look directly at myself or look up … "). She pushes at her flyaway locks, giggles occasionally and purses her lips contemplatively. Her knee, peeking out from ripped jeans, is just in view.

"It's a little scary because I hate being on camera," she muses. Already, the video's racked up some 348,000 YouTube dislikes. The second, in which she shows off her freshly pierced nose and right ear lobe, is poised to follow suit.

Why the sudden reemergence – especially since she's dodged public eye (not to mention, is on probation)? A leak, her lawyers are saying. One, J. Chesney Mason, "has called the video release 'unauthorized' and 'inappropriate,'" according to the Orland Sentinel. And on Sunday, Casey's attorney Jose Baez appeared on Fox News to reinforce that notion, and threaten legal action if needed. "These were private webcam journal-type entries that were solely intended for her," Baez said, according to Florida's WFTV. "It certainly wasn't meant to be disseminated in any way."

Will more crop up? Maybe, if Anthony's closing comment is true. "It's the end of the first," she says. "It's just the beginning."