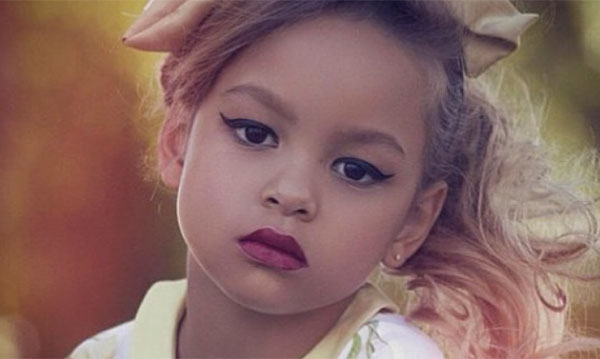 Mario Dedivanovic, the makeup artist behind Kim Kardashian’s contoured countenance, initiated a firestorm on Instagram last week when he posted a photo of a toddler in full makeup – including plump, red lips and winged eyeliner.

The photo has since garnered tens of thousands of “likes,” countless views – and has sparked a glamosphere debate.

Comments on Instagram include “I’m feeling sick” and “This is sending out the wrong message to little girls.”

Initially, E! News reports, Dedivanovic captioned the photo “My future daughter #soCute” – but following the backlash, he added “(this is not my makeup).” Still, he seems to have said all he deems necessary in leaving the image up on his feed.

But as with any social media debate, we must not forget the defenders. “People are so judgmental! I’ve seen little pageant girls with more makeup and hair products than this. There is a time and place for everything. Clearly, it’s a photo shoot and this is AMAZING,” one commenter wrote on a Cosmopolitan article about this topic.

But some Instagramers think the dolled-up look is more befitting pop artists, like Taylor Swift, and others point out that playing with mommy’s makeup is not the same as caking on cosmetics for a photo spread.

According to Refinery29, the photo was taken from a photo shoot for Saplings Magazine, which describes itself as “a feel-good online magazine going back to the days when children were children. … Here at Saplings Magazine the vision is to inspire anyone that is a child at heart to get back to basics with the little ones in their lives, and to appreciate the simplicity of the things we take for granted” and often posts photos of kids.

But it seems to me that with the photo Dedivanovic posted on Instagram, taking childhood simplicity for granted is exactly what the magazine did when it applied enough makeup, more suitable to a young adult, on a toddler who appears no more than 5 years old. She does not look happy to be a kid!

If makeup for tykes is harmless, why does the image turn so many stomachs?

The greatest contender has been mentioned: she’s too young. Surprisingly, what’s not mentioned is how this young girl has been sexualized.

Every parent knows a child’s first few years are her most formative. The gender confidence gap begins with puberty. That leaves an incredibly short and vital amount of time to teach her that it’s not how she looks but what she says that’s important.

Makeup can be fun. Makeup can be expressive. Makeup also covers up the features we’re too insecure to share with the world.

So, what’s the rush? Such excessive makeup accelerates girls’ maturity, forcing them to adhere to a standard that isn’t natural at such a young age. The fact that so many Instagramers cited pageants and the slew of reality shows as justification for the young girl’s adult look is case in point. Praising this unnatural beauty teaches girls the best thing they can do is quantify their looks and accept the objectifying expectations society exerts upon young women.

At what point does a little girl wearing makeup go from being completely innocent to really inappropriate?

Probably when it appears as if they’re on their way to a club and not a sandbox.