Children’s Halloween Costumes That Should Have Never Hit the Streets 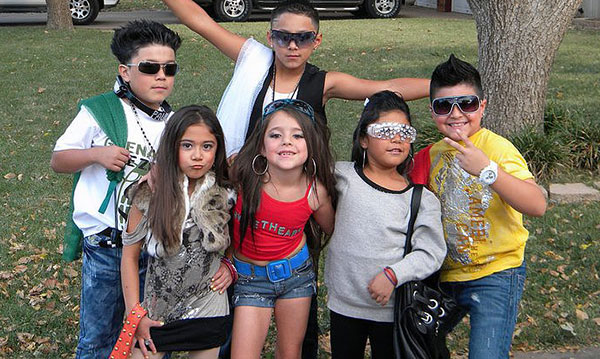 I once watched the Messiah play beer pong at a Halloween costume party and later get into an all-out brawl, which he “won,” with some folks who came as the confederate flag. Needless to say, the freaks are easier to spot on Halloween night, and some parents put their kids on the fast track early.

Not every parent is into dressing her tyke as minion or a Disney princess. Fine. We get it. But when you strive to dress-up your little monsters in original garb, ingenuity can turn obscene. Here, we’ve compiled a list of some brow-raising, tasteless choices seen on E! Online, Popsugar, Babble and Today.com. Check out these Halloween costumes unleashed on children by the worst of us.

Tote your favorite habit around by dressing your baby as the cutest cancer stick you’ve ever seen. The little tyke will be jonesing for his own pack in no time.

Want your little girl to start tallying up her own fair share of catcalls early? Dress her in this armed forces garb that looks better suited for a Playboy Playmate. What better way to honor women serving in the military? Sexism never looked more fashionable.

Medical school is not cheap. Show your angst by dressing your kid as a mentally-crazed doctor in bloody scrubs. Serial killing is a much cheaper, quicker way to make a lasting contribution to society, and your child’s psyche. Thanks, Dexter.

Horrifyingly common, there’s obviously an entire pool of parents (and single celebrities, we’re looking at you Julianne Hough) who’ve yet to acknowledge the importance of the “We’re a Culture, Not a Costume” campaign.

Everyone knows reality stars make the best role models. Now your kids, too, can get in on the trashy DIY fun by dressing as the cast that took the Jersey Shore by storm, leaving used condoms and broken moral compasses in their wake.

Walmart pulled this “Little Amigo” number from its website earlier this year, but not before sparking a firestorm. The costume included an ethnocentric getup for – what I think it’s safe to assume – your non-Hispanic grade schooler.

Breaking Bad fans might be inclined to dress-up their infants as crystal meth-brewing Walter this year. Don’t. If he’s still on breastmilk, it’s too early to address how staying “Above the Influence” will salvage what brain cells you’ve spared him.